Sensory Sensation: Pilobolus is a dance company that doesn't hold back 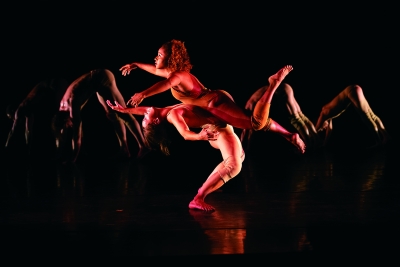 Pilobolus wants to help you come to your senses. The East Coast dance company knows you can watch performances on your phone, but that doesn’t at all compare to seeing a dance show live.

Watching in a place where you can feel the heat of the person next to you, hear their laughter, see the sweat coming off the dancers, and move to the beat of the music coming off the stage—it’s an experience that can only happen in person.

“To engage all of your senses while doing that is something that’s really important,” said Renée Jaworski, Pilobolus’ co-artistic director. “I think all of these things are important and community building and it makes you feel the joy of life. Sometimes, you can just go straight ahead and not look around and not use your senses.”

Along with co-artistic director Matt Kent, Jaworski hopes audiences will use all their senses at Come to your senses, an Oct. 30 performance marking a long-awaited return to the Wharton Center for the Performing Arts.

Throughout the performance are multiple videos, dances both new and from the company’s extensive catalogue, and a piece from Shadowland that uses screens and light as a person transforms into an animal.

“You watch this journey of one body going through many different changes and forms,” Jaworski said. “It’s quite magical.”

In between the dances are videos made and produced by Pilobolus. One focuses on scientist experiments, including a shrimp on the treadmill. Jaworski said with a laugh that it’s her favorite part. Another video is a montage of all the shadow pieces they’ve created, taking viewers through the depths of reality to a surreal place and back again, and there’s a welcome message video that was shot from underneath a clear table.

Jaworski said she didn’t want to give much away about the final video, but it starts with little colorful dots on the screen that move around to form more coherent shapes as the video continues.

“The big reveal at the end is how we do it. I can’t wait for people to see it,” she said.

Pilobolus — founded in 1971 by a group of Dartmouth College students — is well-known for pieces that take viewers on a journey. Come to your senses will do the same.

“Sometimes, modern dance can get really heavy, but we want to make people laugh as well, take them on a bit of an emotional ride,” said Jaworski, who has been with Pilobolus since 2000.

The emotional roller-coaster will begin with Gnomen, a piece from 1997 with male dancers done in four sections. Each one focuses on a different man — all with very different personalities — as they get to know each other, see each other for who they really are, and support one another.

Three women in the performance also get time in the spotlight during a new piece. Jaworski said it’s the first time the company has ever done a trio for women. Until about 10 years ago, Pilobolus never had more than two women in the company at the same time.

For that brand new work, they invited indie rocker and new host of the podcast Song Exploder, Thao Nguyen, to create the music. Jaworski said the company has always been about collaboration with others — it’s one of the aspects she enjoys most about Pilobolus.

Having numbers that showcase men and women of the company plays into the show’s title as well.

“When we were making the program, we really thought about the theme of coming to your senses, so we weren’t just thinking about the physical senses, we were also thinking about it as a play on words,” Jaworski said. “It’s like, ‘Come on, people.’ We wanted to make sure that we represented the males and females of the company equally.”

Yet another dance in the show is Branches, a 2017 work commissioned by Jacob's Pillow Dance Festival and scored entirely by natural sound. For that particular piece, Jaworski mentioned they were asked to make a “dialogue with nature.” They initially weren’t quite sure what that meant, but it turned into them taking a hike in the woods, where they were told to stand 15 feet apart, not talk to each other, and not bring their phones.

“What ended up happening was everybody started hearing not just the obvious things like the birds, but things like the crackle of dirt underneath their feet and feel the balminess on their hands. It just became a much deeper experience,” she said. “They also started to see the obscurity of nature, from mating dances to the cycles of life. We got to really explore with this piece.”

The October performance will conclude with a dance where water is poured all over the stage and dancers slide across it. Jaworski noted that particular number is just plain fun.

“I think one of the great things is that our dancers have a ton of fun onstage and when people walk away, they’ve seen that and have enjoyed watching us have fun onstage,” Jaworski said. “Our hope is that people will forget about their day-to-day for a little bit and then take away the joy from what they just saw.”

Tweet
Published in Theatre
More in this category: « Sparking the Flame: ‘Firebird’ aims to show what the Grand Rapids Ballet can do Review: ‘Camelot’ expertly takes the old and makes it new with talent and craft »
Login to post comments
back to top