Review: ‘Camelot’ expertly takes the old and makes it new with talent and craft 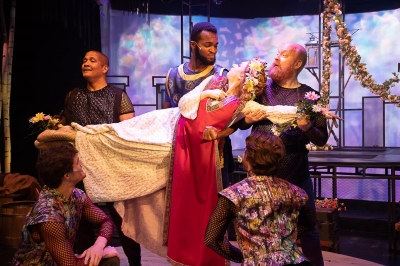 The actors in Farmers Alley Theatre’s current production of “Camelot” don mesh shirts over tank tops with tight black trousers and ornate period vests and peplum jackets in gorgeous fabrics that come off and on as needed.

Kathy Mulay’s costumes are but one element of this sumptuous visual feast, and the sensual way they highlight the seamless shift between contemporary sensibility and grand tradition is symbolic of this production’s take on the classic, celebrated, 1960s musical by Alan Jay Lerner and Frederick Lowe, based on T.H. White’s “The Once and Future King.”

Though it retains the grandeur of its heyday with its gorgeous score and righteous ideology associated with the Kennedy administration, it is updated and mercifully streamlined in David Lee’s adaptation, with a cast of just nine, to bring the focus most clearly to the exquisite and destructive love triangle of King Arthur, Guinevere and Lancelot. It’s poignant and intimate, and works beautifully in the unique space of Farmers Alley Theatre.

Director Lee Buckholz’s vision for this space is heightened by the work of fantastic designers, particularly with Badalamenti Designs’ multi-level set with a central, wooden platform symbolizing the egalitarianism of the round table that presents interesting opportunity for triangular pathways and stage pictures—as well as Lanford J. Potts’ inspired lighting that heightens the dramatic romance, violence, and mysticism of the story with bold colors and projected images.

The emotions here that move from the spectrum of love and passion to rage and bloodthirst are communicated most elegantly in the beloved score, expertly brought to life by Music Director Cindy Hunter and her terrific seven-piece orchestra as well as the phenomenal singers in this talented, marvelously-chosen cast.

The complicated chemistry between and among the three main characters is magnificent. Kevin Toniazzo-Naughton’s wild passion as Lancelot for Sarah Ellis’s Guinevere is equaled by his honorable love and dedication to Dave Anthony Vogel’s King Arthur, who is as committed to his higher ideals and grander purpose as he is to his wife and his friend. And she is wonderfully desirous and conflicted, in love with two men for different reasons and in different ways. Together they tell this ancient tale in a way that feels utterly true and alive while also speaking to a culture that is beginning to grapple with the realities of polyamory.

It’s a tremendous achievement, as are their respective voices—Ellis’s soprano, bold, precise, and especially lovely; Toniazzo-Naughton’s rich baritone and gorgeous rendition of “If Ever I Would Leave You”; Vogel’s earnest tenor and wonderful “How to Handle a Woman”—and the way they meld together.

And as serious and complex is their reach is also met with real comic gifts that border on camp at times, particularly in “The Lusty Month of May,” heightened by Heather Paige Folsom’s playful choreography, and the chorus of knights—Atis Kleinbergs (also responsible for some great fight choreography), Jeff Cachero, Este’Fan Kizer, and Hunter Buckingham—who physically express and hold up so much of the narrative’s movement with very little dialogue.

Aleksander Papanastasopoulos really comes into his own as Mordred and creates a wonderfully wicked character who’s at turns funny, sinister, and sympathetic for his commitment to justice. Daniel Schubkegel also tugs at the heartstrings as the child, Tom of Warwick, offering a poignant transition into the lineage of the story and the purpose of storytelling itself.

Indeed, this particular story is tremendously told and well worth taking in. Whether you come to the theater with preconceived expectations of the grand old musical “Camelot” or not, you are sure to be surprised if not delighted, and to see something recognizable yet made new.

Tweet
Published in Theatre
More in this category: « Sensory Sensation: Pilobolus is a dance company that doesn't hold back Review: Barn’s ‘Rocky Horror’ is a stupendously talented, refreshing rendition of a cult classic »
Login to post comments
back to top