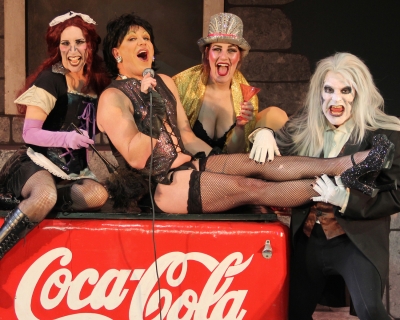 For the first time, The Barn Theatre in Augusta has emerged from its Summer Stock mainstay to offer their truly delightful rendition of The Rocky Horror Show at the most appropriately ghoulish and freaky time of the year, though it’s actually the 12th time they've performed this campy cult classic rock musical for adoring fans both old and new.

The Rocky Horror Show falls entirely in their wheelhouse and is some of the most fun audiences have had at The Barn for decades; and yet they’ve made it new again and slightly changed its feel with new primary cast members as well as Barnie favorites — some of whom have performed in all 12 productions since 1990 — reprising their fabulous roles or in some cases, playing new ones.

The dark rock and roll musical comedy pays homage to sci-fi and horror B-movies (as well as humanity’s various shadow sides) and spoofs Frankenstein with this story of a newly engaged naive young couple who stumble upon a castle full of twisted characters who introduce them to the pleasures of fulfilling their deepest unexplored desires. (“There’s no crime in giving yourself over to pleasure,” Frank says. “There is in Augusta,” retorts savvy audience members.)

Dr. Frank-n-Furter has created a magnificent half-brained Adonis for his own titillation, but instead Janet performs her own successful seduction. Meanwhile, a former delivery boy is murdered, and creepy servants Riff Raff and Magenta reveal themselves to be aliens who plan to return to their home planet Transexual in the galaxy Transylvania, and provide the ultimate plot-twist and denouement.

The audiences — including those full of folks dressed in sparkles, boas, fishnets and glittery top hats, among others unfamiliar with the campy cult classic — will effectively influence and change the show from night to night with their interactive participation. This happens largely in scenes with Steven Lee Burright as a marvelous, stiff-upper-lip Narrator, who rolls with and plays with the punches with wonderful improvisational panache. It’s a tradition born of midnight showings of the 1975 film adaptation of the original 1973 musical.

Its creator, Richard O’Brien, who played the original Riff Raff, credits the popularity and longevity of the show to the fact that “(I)t taps into the most primal story of western civilization: the fall of man. Brad and Janet are Adam and Eve, and Frank-n-Furter is the serpent,” he’s quoted as saying in The Guardian.

Alan Palmer, making his Barn debut, plays Frank-n-Furter in this production, and he brings a sensuality and unusual compassion to the role, as well as a killer voice and the stage presence of a well-seasoned drag queen. He so fully embodies the paradox of this marvelous character with his pretty lady face and middle-aged man body, that his hair, make-up and costumes feel almost understated in the most interesting ways. It all builds the character so convincingly that by the time he sings “I’m Going Home,” it’s genuinely moving.

Other standout performances among a universally terrific cast include Barn newcomer Beau Hutchings as a particularly earnest and nerdy Brad; Melissa Cotton Hunter, who seems to effortlessly bring the camp as Janet with, her exceptional screams, as well as gorgeous singing and shameless sexual evolution; Patrick Hunter makes an indelible mark as Eddie, who emerges from the cooler for a hot minute to wow everyone with his presence; Johnnie Carpathios somehow gives the shimmering meathead beefcake Rocky depth with his comedic genius; and it’s a special treat to see Director Brendan Ragotzy bring his unique flair to the role of RIff-Raff and play with his IRL wife Penelope Alex as the sinister yet sexy Magenta.

It all comes together exactly as it should, with fun surprises as well as the dependably excellent artistry we expect from The Barn. It’s a wonderful bonus that they’ve brought Rocky Horror back for Halloween, and one hopes they might be starting a trend. For though Frank-n-Furter declares at an apex moment in Act II that “It’s not easy having a good time,” The Barn makes real the irony of that statement as audiences return again and again to do the “Time Warp” alongside this stupendously talented company.

Tweet
Published in Theatre
More in this category: « Review: ‘Camelot’ expertly takes the old and makes it new with talent and craft Review: ‘Firebird’ is an astounding display of Grand Rapids Ballet’s unbelievable talent »
Login to post comments
back to top