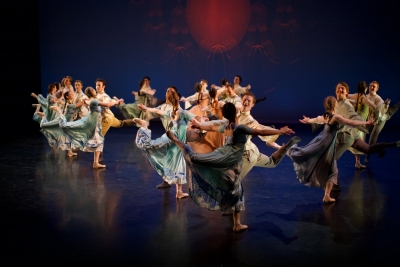 With “Firebird,” Grand Rapids Ballet’s exquisite season opener, the company shows its extraordinary range, relevance, and reach under James Sofranko’s artistic direction, and that they never been stronger, better, or more beautiful as a company.

Though the program includes a variation of the titular work choreographed by Yuri Possokhov and set to Igor Stravinsky’s first classic composition, there is so much more to this show than this beloved storybook ballet based on a Russian folktale and originally commissioned for the 1910 Paris season of Sergei Diaghiliev's Ballet Russes with choreography by Michel Fokine.

Thankfully so. For though the dancers’ technique and expressivity is excellent, their storytelling ability is constrained by the limitations of Possokhov’s choreography, and much of the other works in this program better showcase the extraordinary talent of this company. And yet, Yuka Oba-Muschiana’s Firebird is still mystical; Josue Justiz’s Prince and Julia Turner’s Princess are adoring, pained and lovely; and Matthew Wenckowski’s Kaschei is both terrifying and charming.

Their "Firebird" is still an audience pleaser and an enormous achievement with a huge corps de ballet and that gorgeous score; however, the program might have been better named “Cold Virtues,” after Adam Hougland’s truly stunning dance that originally premiered in 2003 for Louisville Ballet. It is riveting and disturbing, and will haunt the memory of anyone who sees it.

Raw and elemental, this dystopic piece looks like a sepia photograph sprung to life and feels as if it’s from another time yet also familiar. Shot through with masculine energy, seven men and seven women, all lithe, nimble, fierce, and strong, with angular arms and soft shoes, use every ounce of their classical training to create an unforgettable cinematic modern-infused ballet, with pairs Alexandra Meister-Upleger and James Cunningham as well as Emily Reed and Steven Houser at the center.

Set to Philip Glass’s “Glass Violin Concerto” with wild, dark, dramatic strings and costumes by Marion Williams, the dancers make backwards entrances with outstretched arms; they roll on the floor, shimmy, sway, and embrace in pairs; they get dragged across the floor on a diagonal line with 180 degree turnout; they freeze in midair; they move in a circle as if in a folk dance with one dancer at the center; and they otherwise create stunning lifts, extraordinary angles and swirls to heart-racing effect.

Principal dancers Yuka Oba-Muschiana and Matthew Wenckowski are transfixing in Penny Saunders’ sensual pas de deux “Again.” The tension-filled contemporary piece begins and ends with the dancers in deep bows to the audience and with moments in-between that shift from the closeness of full-body contact lifts in attitude to their being apart, with a distance between them that feels bigger than that which we can see. Their performance is elegant and nuanced, particularly as they draw circles on the floor with their toes as well as in the air with their bodies. It is gorgeous.

The opening piece, “Mozart Symphony,” is a wonderful original work by Artistic Director James Sofranko that premiered last June at Grand Rapids’ Festival of the Arts. The classical romantic dance is an ebullient celebration of Mozart’s notoriously joyful music that pays terrific homage to the master for its musicality. Though in an understated way, it takes a nod from George Balanchine and is very reminiscent of New York City Ballet’s heyday with its uplifted pas de deux, pleasing asymmetrical work, and glorification of the feminine yet with very strong male dancers. Lighthearted and at times funny, the five pairs of dancers each carry their own personality and quality, often spritely and impish. Little frog-legged lifts and a move in which a female dancer nestles herself under her partner’s arm into his embrace are but two examples of sweet yet lasting motifs.

“Firebird” is so much more than its titular piece and truly shows off the best Grand Rapids Ballet has to offer, which is more than can reasonably be expected of a professional regional ballet company. This is a group of dancers whose work is more than ready to be launched on a national if not international stage. And yet West Michigan patrons are among the lucky few who receive the gift of their live performance in the here and now.

Tweet
Published in Theatre
More in this category: « Review: Barn’s ‘Rocky Horror’ is a stupendously talented, refreshing rendition of a cult classic Opera Overhaul: Bringing ‘The Mikado’ into the 21st century »
Login to post comments
back to top