Opera Overhaul: Bringing ‘The Mikado’ into the 21st century 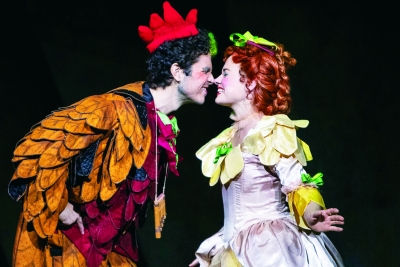 The Mikado debuted in March of 1885 and never really left the stage. Popular at the time, it remains popular now, as beloved for its smart humor as its beautiful music.

Originally, it was set in an exoticized Japan, replete with lavish costumes and sets. As of late, productions have minimized or even eliminated Japanese elements, revealing the satire of Victorian Britain that was only ever at best half-hidden. On Nov. 1 and 2, Opera Grand Rapids will stage the show at St. Cecilia Music Center.

“With the creativity of Gilbert, that incredible use of language, and with Sullivan’s music, they created a work that survived beyond their own era,” Meena said.

Updating the production for contemporary sensibilities required changes not just to the costumes and décor, but to the script as well. Offensive words were removed, and some text was rewritten.

“We don’t live in Victorian England,” Meena said. “It speaks well to our society in general that we are thinking about these things. And we have a responsibility as a locally based regional company to build bridges, not tear them down. If we’re not sensitive to that, then shame on us.”

The original choice of setting may have been a cheerful embrace of, or concession to, Western, Victorian-era obsessions with the East; there is no shortage, after all, of Victorian pulp featuring Asian mysticism and exoticism. Additionally, setting the show there allowed Gilbert and Sullivan to poke ruthless fun at British figures without fear of offending them. But times have changed. And, besides, they’re all dead.

Still, the intentions of the creators very much guide the production. Drake Dantzler, who plays Nanki-Poo, the son of the titular Mikado (aka Emperor), points out the duo often knew who they were writing a role for and pitched the role to that person’s strengths. Dantzler, who has played this particular role several times, admires the diversity of characters.

“Ask five people who their favorite people in the show were, and you’d get five different answers,” he said, adding that he finds the music to be catchy and charming, and the dialogue to be witty, lively, and adaptable. “It has an orchestra and these grand melodies, but it’s almost closer to music theater than to opera.”

To prepare for it, he is eating right and exercising regularly. He tries to get enough sleep and he maintains an awareness of how often he speaks — as a professor, it isn’t rarely. He sees an obligation to keep his vocal instrument in good shape.

Rachel Mills, who plays his love interest, Yum-Yum, agreed. A mother of a 3-year-old son, she arms herself against germs with matcha tea and staying well hydrated. To spare her voice strain, she sometimes sings by breathing through a straw in water, a technique called straw phonation.

In her role, Yum-Yum comes across as flighty. That’s by design.

“Sometimes, it’s easier to come across as less intelligent than you are,” Mills said. “That’s still relevant today. A lot of women still feel like we have to edit ourselves for other people’s comfort, particularly around men. I think that’s improved, but I still see it, sometimes in myself. Yum-Yum is so charming, so sweet and beautiful. But as she says in her aria, ‘I mean to rule the earth as the sun does the sky.’”

It will be a relatively small production: Between principal artists, chorus, orchestra and technicians, Meena estimates that around 110 people will contribute to the show. A show like Aida, by contrast,
requires 250.

“One of the reasons the show will work so well is that we’re performing at St. Cecilia Music Center,” Meena said. “There’s fewer than 500 seats. There’s such a level of intimacy and immediacy.”

The venue remains something of a hidden gem; Wu Han, a renowned pianist and co-artistic director of the Chamber Music Society of Lincoln Center, recently called St. Cecilia “perfect, like a smaller Carnegie Hall.”

Mills recommends the show to anyone, whether you’ve had years of experience with opera and musical theater or none whatsoever. The show is an accessible story for all.

“It’s going to be hilarious and entertaining and thought-provoking,” Mills said. “Come see it.”

Tweet
Published in Theatre
More in this category: « Review: ‘Firebird’ is an astounding display of Grand Rapids Ballet’s unbelievable talent Finding Valjean: What it’s like to play the lead of Broadway’s ‘Les Misérables’ »
Login to post comments
back to top