Finding Valjean: What it’s like to play the lead of Broadway’s ‘Les Misérables’ 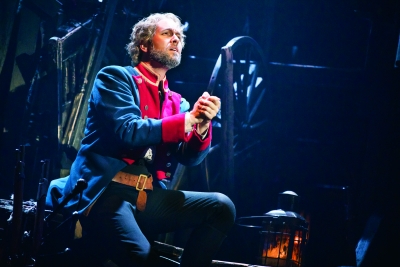 If Nick Cartell could let audiences know anything about the upcoming production of Les Misérables, it’s this: Fully read the details in your program.

“Really do yourself a favor if you aren’t familiar with the show: Read that synopsis, so you know what’s going on, you know who the characters are,” said Cartell, who plays Jean Valjean, one of the show’s leads. “This show moves very quickly.”

Based on Victor Hugo’s novel of the same name, the musical follows Cartell’s character, an escaped convict, over multiple decades as policeman Javert continues to pursue him. Needless to say, many other things happen throughout the show, but you’ll have to see it to find out those details.

This version of the national touring production, which began in 2017, will look similar to those who saw the 2014 Broadway revival.

Cartell said the turntable from the original production is gone, but the touring show now has projections that show artwork done by Hugo and other pieces based on his work.

“It really helps to bring our audience in to a time and place. You’re going to feel like you’re going on the actual journey.”

The journey of Les Misérables as a musical began when Alain Boublil and Claude-Michel Schönberg adapted the 1862 novel. The show first premiered in Paris in 1980, before producer Cameron Mackintosh brought an English version to London’s West End, where it would become the longest-running musical there before recently closing.

In 1987, the show came to Broadway and won eight Tony Awards, including Best Musical, Best Book, and Best Original Score.

While the musical obviously has been a huge success, how does a show set in 19th-century France still connect with audiences — even in 2019?

Cartell has some ideas.

“At the end of the day, this is a story about people fighting to be heard,” he said. “And there is something about this story — something about these characters that audiences connect with because they see themselves in them. They see a group of people who are begging for a better life.”

Like many, Cartell saw himself in the characters after seeing Les Misérables for the first time. Originally, he thought of himself more as the young student, Marius, primarily because Cartell was a student himself when he saw a regional production in Arizona.

But when he auditioned for the touring production, he found himself identifying much more with Prisoner 24601, aka Jean Valjean.

“That’s the exciting thing about this show: It grows with you,” said Cartell, who has wanted to work in musicals since a middle school field trip to see Cinderella.

With growth also comes constant discovery. Cartell is still finding new aspects of the role, which he acquired after five callbacks.

He’s also highly aware of the pressure of taking on a role like this, one that’s been played by greats such as Colm Wilkinson, who was in the original London and Broadway casts, and Hugh Jackman, who was in the 2012 film.

Not comparing himself to those who have played Jean Valjean before him was essential. Instead, by being in this show, he’s becoming the Jean Valjean for a new generation of viewers. Cartell tries to bring as much of himself to the role as possible and find the inner fight he admires most about the character. He’s also had to find the element of forgiveness that one has for not only others, but for themselves.

The cherry on top is getting to share his favorite song, Act II’s “Bring Him Home,” with the audience. While standing on the barricade and singing about the sacrifices his character has made, Cartell thinks about his parents, who did the same for him.

Cartell’s dad called him the week of his final callback to tell him his mom didn’t have much longer — she had been battling cancer for the past six years. Cartell said he was going to come home, but both parents told him to stay and see this opportunity through.

“They said, ‘This could be a life-changing, career-changing opportunity for you.’ And it truly has been.”

For Cartell, though, like all good things even this role must come to an end. He has plans to leave the tour soon and go back to New York. But when that does happen, he’s now part of the legacy for a musical that is standing the test of time.

“It’s truly something that’s exciting and thrilling,” he said. “When you first hear the downbeat of the music right at the top of the show, you get this rush of energy that I’m sure the audience feels too. This rush of, ‘OK, here we go.’

“I think it’s been a life-changing experience for the entire company.”

Tweet
Published in Theatre
More in this category: « Opera Overhaul: Bringing ‘The Mikado’ into the 21st century Review: ‘Les Misérables’ at Wharton Center is the best of the best »
Login to post comments
back to top