Review: ‘Les Misérables’ at Wharton Center is the best of the best 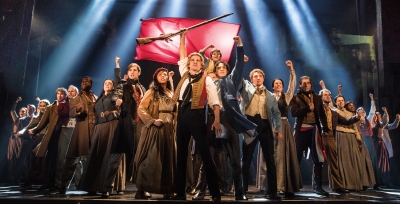 In 2019, basically 2020 at this point, can a musical about 19th century Frenchmen (and women) keep the attention of audiences for nearly three hours?

You bet it can.

Les Misérables came to the Wharton Center last night and as soon as that first note hit, everyone sat up to attention, especially the couple next to me, who had clearly seen the shown before.

Quick side note: make sure to be on time to this production. When the Wharton Center says they are starting promptly, they mean it. If you’re even a minute late you won’t be allowed in for the first 14 minutes of the show, which basically serves as a very important prelude to the entire production.

OK, back to our regularly scheduled programming.

One of the first things you’ll notice is the show’s use of a projector across the entire back wall. The show’s set and image design was by Matt Kinley. When combined with Paula Constable’s lighting, it all plays extremely well into the show’s darker overtones.

Anyone who saw the 2014 Broadway revival will recognize the stage set-up. The projector shows artwork by artists inspired by Victor Hugo’s own art and plays a key role in helping audiences feel like they are actually in France.

For those who don’t know, the show is adapted from Hugo’s epic 1862 novel of the same name. And when I say epic novel, I mean it, coming in at 365 chapters. The musical was adapted by Alain Boublil and Claude-Michel Schönberg, and begins in 1815 before two time jumps, first to 1823 and then to 1832, where the bulk of the action takes place.

Needless to say, a lot happens over the course of three hours, to the point where at times it feels rushed because it’s all done in such a quick succession. Thankfully, there’s a synopsis in the program to give you an idea of what’s happening if you get lost, as well as an idea of who all these characters are.

There’s Jean Valjean (Nick Cartell, who has played the role on the national tour for over two years), who at the beginning is released from prison after serving 19 years for stealing bread. He decides to break his parole and starts his life anew, becoming mayor and agreeing to raise the daughter of a dying prostitute. Towards the end, he also joins in the fight for freedom.

If you’ve read even the briefest synopsis of the sung-through musical, you know the main rivalry in the production is between Valjean and Javert (Josh Davis). Each man begins the show as hard and cold, with clear distain for the other. Cartell and Davis are simply phenomenal to watch interact together — those harmonies will have you glad they’re enemies — and alone they shine just as bright.

With a permanent scowl across his face, Davis’ portrayal of the ruthless policeman is memorizing. He’s angry and bitter and just plain mean as his pursuit of prisoner 24601 continues. But it’s his decline and unraveling as the show continues that makes him truly remarkable to watch, as his life choices seem to eat away at him before the guilt finally overtakes him. He also has a baritone that’s showcased every time he comes on stage, like during his two critical solos, “Stars” and Act II’s “Soliloquy.”

Then there’s Valjean, the heart and soul of Les Misérables, something Cartell wears well. From his first solo at the top of the show to Act II’s stunning “Bring Him Home,” Cartell brings with him not only a pristine voice with the power to match — just count how long he holds some of those notes — but so much empathy when interacting with every character he meets. Cartell will make you root for him at every turn and cry when he pours his heart out during some of the musical’s vital scenes.

As mentioned, there is a lot happening during Les Misérables, with many memorable characters and songs. All the hits you’ve probably heard like “I Dreamed a Dream” and “One More Day” are just as epic and beautifully done as expected, with Paige Smallwood’s (playing Eponine) rendition of “On My Own” being a highlight of the evening. She’ll take your breath away as she clearly struggles with loving someone whose heart will never belong to her.

The entire cast is phenomenal, with standouts such as Matt Shingledecker’s portrayal of Enjolras, a student revolutionary leading the way of the Friends of the ABC. Shingledecker is so charismatic and sings with such conviction I’d join him in the fight too. There’s also his friend, Marius, played by Joshua Grosso. Marius begins as a lovestruck boy — seen during all his early moments with Cosette (Jillian Butler, who can hit high notes that don’t seem in the natural register) — but Grosso must quickly become a man, something he does with ease and a killer voice.

I also have to mention Thenardier and Madame Thenardier, Jimmy Smagula and Allison Guinn, respectively. Are there characters pretty horrific? Yes. Will they also make you laugh over and over at their antics? Also yes. The duo go toe-to-toe with each other and are often comedic relief during the show’s few lighter moments. “Master of the House” is a delightful showcase for them both.

Not to be that person, but I’ve seen a lot of theater, and more than once I’ve seen at least one or two actors in a production not quite able to meet the bar set by their castmates. That isn’t the case in this touring production. Each actor — from the youngest to the oldest — clearly builds off the other, knowing when to let them be the star and take a step back, filling the stage with harmonies that have plenty of layers and depth. The cast does what the best of the best do: make each other better, and make this easily the best touring production I’ve ever seen.

Les Misérables may be lengthy and about people whose lives took place so long ago, but with a cast like this and themes that are beyond relevant today, don’t expect it to be going away any time soon. In fact, if they can keep the quality of the cast as high as it currently is, this production will be on the stage for decades to come. Just be sure to be on time.

Tweet
Published in Theatre
More in this category: « Finding Valjean: What it’s like to play the lead of Broadway’s ‘Les Misérables’ Review: ‘eLLe’ is a night of high-quality, totally original theater »
Login to post comments
back to top