Review: ‘eLLe’ is a night of high-quality, totally original theater 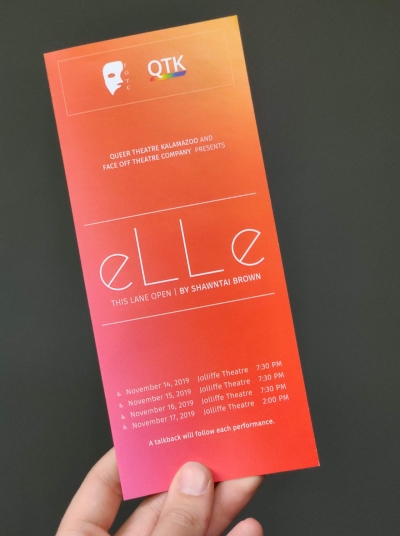 Detroit-based, Western Michigan University educated playwright Shawntai Brown has been providing installments of “eLLe”, her episodic stage series loosely based on Showtime’s “The L Word”, for 10 years, and Kalamazoo audiences have been privy to the unfolding dramas and comedy of this localized cast of queer women through productions from different theaters.

The latest episode deliberately includes a larger cast of people of color, and the quite delightful production is the product of a collaboration between Face Off Theatre Company and Queer Theatre Kalamazoo, the latter of which has put on the last six “eLLe” installments.

Though it’s a fairly low-budget production, both the writing and the characters come across as wonderfully bold in downtown Kalamazoo’s Jolliffe Theatre under wise and nimble direction from Co-Directors Marissa Harrington and Sarah MacLean.

For anyone who has seen any of the “eLLe” productions, many of these characters are familiar, even though some of them are played by different actors here. Lane is at the center, and the show begins with the dissolution of her engagement when she realizes her fiancée Izabel, a melodramatic narcissist and self-described “influencer,” has gone to a sex party hosted by her ex, Naya.

Their community expands to include Lane’s sister, Carrie, who has endured her own breakup and quit being a counselor to work in a grocery store because she was tired of listening to people; Mia, whose coffee shop, Spice, a local institution and safe space for queer folk, has closed after 10 years and forced her into a deep depression as well as sustaining herself by buying cheap wine and bread with coins from a sock; Devon, a self-care obsessed musician and writer whose vibrator batter is always charged; and Danniqua, Carrie, Nayla, and Izabel’s boss at the grocery store who turns out to be much more interesting and complicated than she appears.

The narrative drifts and wends its way through scenes of various configurations of these characters, sometimes solo with monologues, as they grapple with issues of desire, relationships and community.

At times, the writing is stronger than the acting transmits; however, some performances are truly excellent. Celine Justice’s Lane is so real it seems as if she isn’t acting; her emotions come across as genuine, and her energy levels are just right. She does great scene work with Zaynee Hobdy, who is bold, energetic, and unapologetic, though also nuanced, as Naya.

The rest of the ensemble does a fine job to bring these characters and their relationships to life, and even in their moments of overmuch zeal or wild underplaying, the humor and storytelling still comes across.

And the show includes more than “eLLe”, as it opens with Denise Miller’s powerful, short protest drama “A Ligature for Black Bodies.” Directed by Marissa Harrington with an excellent cast of seven actors and two dancers, it’s a magnificent 18 minutes of exploring and questioning the power of spectacle and its devastating effects by forcing the literal and figurative spectator to see brown bodies and what we have done to them with the intensity they require for us to see those bodies as human.

The play juxtaposes the present with the past, and begins by asking the audience to “consider the noose.” When we do, we can’t help but realize that “suddenly 2015 and 2016 looks like 1910.”

Gorgeous dance interludes performed by Shawm Moton and Shantese Robinson bring the exquisite elegance of brown bodies into focus and punctuate the telling of needless systemic tragedies, the product of racism and white supremacy. #LaquanMcDonald, #WalterScott, #TamirRice, #SandraBland are represented by actors and signs they hold, and the stories of their deaths emerge with news sound bites interspersed with white police officers’ testimonies and medical examiner’s findings. The effect is visceral, undeniable, and stunning.

It’s such a thrill that a city the size of Kalamazoo can offer a night of high-quality original theater brought by a collaboration between two theaters dedicated to bringing forth stories and lives all too rarely seen on stage. It’s clearly a labor of love, one that builds and builds upon the best this community has to offer.

Tweet
Published in Theatre
More in this category: « Review: ‘Les Misérables’ at Wharton Center is the best of the best Review: ‘Ochre & Indigo’ captures the innovation and powerful voices of local dancers »
Login to post comments
back to top