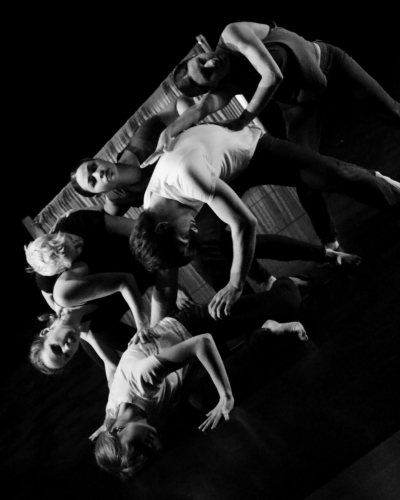 Cori Terry, Founder and Artistic Director of Wellspring/Cori Terry & Dancers, described her philosophy on choreographic intent by quoting celebrated modern dance innovator Mark Morris: “I make it up and you watch it.”

This was, in part, her way of introducing her singular new work that closes “Ochre & Indigo Fall Concert of Dance,” which offers six pieces, including three premieres, a film, and three works by Terry. In “Like a Storm,” five women wearing gauzy, white, two-piece costumes by Maddie Korff use their arms to slice through the air, reach toward the sky, hold each other up, huddle together, twirl, and then slice through the air again.

Terry said she heard the music by Esmerine as an anthem, a call to arms, and uses it to speak from a female point of view to their strength, vulnerability, grace, discipline, and focus without being overly attached to a concept beyond that.

They move in patterns and shapes both angular and lilting — in keeping with much of Terry’s choreography, which emerges from her training with the Erick Hawkins Dance Company and their trademark normative style of dance.

In this show, they reprise “Warm Shadow” from last spring, in which dancers repeat patterns and use the space between two set pieces as something to break through and emerge from with gusto in loops and lifts, almost as if they’re presenting themselves down an imaginary catwalk that melts and widens into the entire space of the stage where they break off in pairs, triads, and into a pile. Though originally set on a different piece of music, it’s made new with a sexy, bluesy rock song by Fink, the dancers in stretch blue jeans and t-shirts.

“Give and Take Away,” Terry’s other dance in this show, from 2013, is a piece in four sections, with distinct moods and qualities. From high energy, frenetic twirls and dynamic lifts to downward momentum, slow walking and descending toward the floor, they move individually and in clusters, with lights from Kristen Chesak enhancing the overall effect.

“The Empty Sky,” a premiere by long-time Wellspring dancer Alexis Harris, draws on the elements to create an effect that is, at turns, grounded, fluid, full of heat, ethereal, and also takes flight. Set to music by Sophie Hutchings and Thomas E. Rouch that is strings and keyboard against the backdrop of a waterfall, with Maddie Korff’s costumes, halter tops with wide-leg pants, the dance is reminiscent of the tropics.

The concert’s other two pieces push boundaries. “Without Words” is a conceptual film by Carolyn Pampalone-Rabbers presented on two screens where Alexis Harris appears on one and Jasmine Statzer on the other; alternately and then together they are talking heads with no sound and then moving, backlit, as if in rehearsal. What it shows most clearly is that dance is most engaging and alive when not filtered through a screen or two.

“Three Generations and Marigolds” blends spoken word with movement. Lit starkly from above and from the sides, Jasmine Statzer and Julia Statzer each speak of physical and emotional violence as a personal experience but passed on through generations while the other one moves to the words the other speaks as if it’s music. They repeat: “I, we, never knew” after sharing details of relationship abuse, and the effect is a powerful one of speaking out—with both body and voice united, and the two women, also, united. A reclamation.

Even with the important inclusion of a very strong male dancer in Andrew Niedbala, this concert is a purposeful display of women’s embodiment and power. Through Terry’s and the other artists’ lenses, for they made it up; and perceived by us, for we watch it. And especially potent in this cultural moment, for we all hold the capacity for shocking transformation and change.

Tweet
Published in Theatre
More in this category: « Review: ‘eLLe’ is a night of high-quality, totally original theater Review: As a live radio play, ‘It’s a Wonderful Life’ delightfully breathes new life into a beloved classic »
Login to post comments
back to top