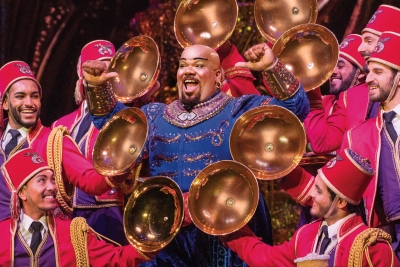 Well, close to home. Blossey, who lived in Bay City, will be in East Lansing at the Wharton Center when the national touring production of Aladdin arrives in December. Blossey will be easy to spot, as he’s playing the famous Genie.

“That’s the dream come true,” he said of returning for this production. “That’s the ‘I did it’ moment.”

Over the course of the two-and-a-half-hour musical, audiences will watch as Blossey taps, sings and cartwheels across the stage, while rocking a whole lot of glitter.

Especially when you get to perform show-stopping numbers with direction and choreography created by a legend himself, Casey Nicholaw, who won a Tony Award for his work on the smash-hit Book of Mormon. It all starts with Blossey’s tour-de-force performance of Act I’s “Friend Like Me.”

And Blossey does just that.

Easily one of the biggest numbers to make its way across the stage of the Great White Way, “Friend Like Me” is almost eight minutes long. When you’re singing, dancing and moving the way Blossey does, it’s a huge feat to perform for that long.

That doesn’t mean the song isn’t fun though.

As a kid, Blossey was kind of like the Genie in that number, always trying different ways to catch somebody’s attention. If one thing didn’t work, he would try another.

As far back as he can remember, he’s been deep in musical theater. If there was an audition somewhere, he was there. Blossey performed in Saginaw and Midland before moving to New York in 2003, where he did the whole waiter/bartender thing while working jobs here and there before getting cast in regional theater productions. From there, the theaters only got bigger.

“I just kept pushing. I kept investing in myself and being the best I could be and selling the best product I have to give.”

That hard work finally led to Aladdin, where Blossey made his national tour debut.

The musical premiered on Broadway in 2014 and has since become one of the highest-growing Broadway productions of all-time, with a total gross so far of more than $400 million.

For those who somehow haven’t seen the 1992 Disney animated film the musical is based on, the story follows Aladdin, a poor young man who is granted three wishes by a genie in a lamp. Aladdin uses his wishes to try and woo Jasmine, the Princess of Agrabah. In order to gain her love, the street-smart commoner has to become someone he isn’t and deal with Jafar, who is — simply put — the absolute worst.

Blossey was a huge fan of the movie as a kid, watching his VHS copy so many times it broke.

With a book by Chad Beguelin, music by Alan Menken and lyrics by Howard Ashman, Tim Rice, and Chad Beguelin, Aladdin on Broadway took the timeless Disney tale and added new songs as well as songs that were cut from the film and restored for the musical.

Aladdin was nominated for five Tony Awards and received one, which went to James Monroe Iglehart for his portrayal of the Genie. Iglehart’s performance at the Tony’s ended up having a huge impact on Blossey.

On the night of the award show, Blossey was doing a production in Brooklyn. At the same time, Iglehart performed a “Friend Like Me” onstage and Blossey’s phone blew up.

“People thought that was me and started texting and calling. I was like, ‘No, that’s not me.’”

But it did ignite a fire in Blossey to play the role.

Blossey was the standby for both the Genie and the Sultan on the tour before eventually being called to his current position as the full-time wish-granter. He began those performances in September of this year.

Before fully taking on the role, he was able to work with prior Genies to help him perfect his own. He’s figured out what works best for his version of the role, which impacts not just his performance but his own personal experience onstage.

“Just being full of heart. I try to get as much heart as I possibly can.

Tweet
Published in Theatre
More in this category: « 2019's Best of Theater Tough Nut to Crack: Grand Rapids Ballet’s ‘The Nutcracker’ is a huge undertaking of artistic collaboration »
Login to post comments
back to top