Tough Nut to Crack: Grand Rapids Ballet’s ‘The Nutcracker’ is a huge undertaking of artistic collaboration 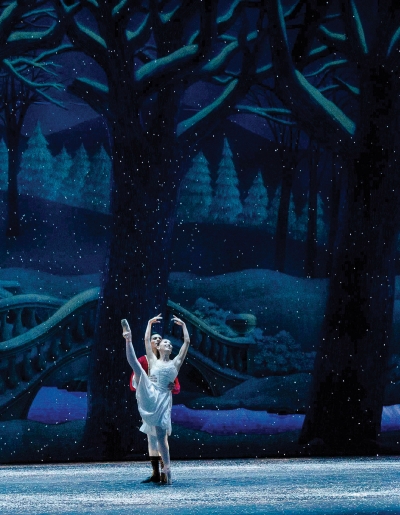 Over 75 years, The Nutcracker has become a holiday tradition and showcase of talent for ballet companies and families across the nation. Yet while nearly every dance company performs a production for the holidays, it’s no easy feat.

“It’s probably the hardest full-length performance any choreographer can do, especially in North America, because there’s such an anticipation behind it,” said Val Caniparoli, choreographer for the Grand Rapids Ballet rendition of The Nutcracker. “There’s so much riding on The Nutcracker because it’s yearly. You can’t go too crazy with the story since it’s got to appeal to children as well as adults, you’ve got to work with children’s schedules, and it’s something that everybody wants to come to every year and bring their children.”

James Sofranko, artistic director of Grand Rapids Ballet, notes that work for this show starts earlier than Halloween, even amid other performances. As the ballet simultaneously practiced Nutcracker and the recent Firebird Sofranko was left with a deep appreciation for the artistic variation and balance these shows give the company.

“There’s a sense of urgency for a show like Firebird and an air of excitement around it. With The Nutcracker, you know it’s coming every year like clockwork. But that being said, there’s a familiarity with The Nutcracker that you don’t get with Firebird,” Sofranko said.

“For a show that comes once a year or every so often like Firebird, there’s a bit of a learning curve — you don’t know the story or the music — but with The Nutcracker, you know the story and the music, so you can really start the first rehearsal on your artistry.”

Some returning dancers may be able to do some of the routines in their sleep, though that doesn’t mean The Nutcracker remains the same each year. Caniparoli, who has contributed to the repertories of more than 50 dance companies around the world, returned to Grand Rapids Ballet for about two weeks to revise the production.

“When you’re practicing in the studio, you’re so close to it. But when you’re in the theater, you can look back at the whole picture and think of ways to tweak it and revamp different aspects,” Caniparoli said. “It’s not like it’s a ballet you do once every five years. This is a ballet done every year, so you have the opportunity to make it better and better every year.”

With the music of Pyotr Ilyich Tchaikovsky performed live by the Grand Rapids Symphony, this year’s production adds the character of a male Cavalier to dance the pas de deux with the Sugar Plum Fairy. This new variation will move toward the end of the ballet, instead of its previous place at the beginning of Act 2.

“I’m using Lew Christensen’s base as a model, so there’s tradition and history in it, but there’s also my own stamp on it as well.” Caniparoli said.

Every year, the production and set design are a huge part of the show, joining the forces of Chris Van Allsburg, author of The Polar Express and Jumanji, and Tony Award-winner Eugene Lee. The set design utilizes innovative projected images that create special 3D effects, which are “downright magical and provide utterly seamless transitions and unprecedented narrative clarity in a rather complex story,” according to Revue’s own dance critic.

Working with Lee and Van Allsburg is a remarkable get for the ballet, though the latter grew up in Grand Rapids and even attended East Grand Rapids High School.

“It’s really nice when a production has a tie to its hometown,” Sofranko said. “This is a perfect collaboration between this illustrator and The Nutcracker, since the story is so magical and fanciful. There’s just so many theatrical elements and fantastic storybook elements that when you toss in really great dancing on top, it’s a show for everybody — both kids and adults.”

With an average of 75 to 80 student dancers and more than 30 professional company dancers, apprentices, and trainees, The Nutcracker is a unique opportunity where dancers of all ages achieve a culminating moment of validation for everything they’ve worked for.

“Every time you sit in the audience, you’re witnessing somebody’s entire lifetime of work up there onstage, whether it be the principal dancer in the front or the dancer in the row of Flowers,” Sofranko said.

Between the dancers, symphony, chorale singers, choreography, costumes, and set design, the amount of effort, hard work, and talent it takes to produce a successful performance like The Nutcracker is vast. Yet the Grand Rapids Ballet understands the important impact a show like this can have on the local community.

“When you’re in the audience, you feel the focus of each dancer up on the stage and you know that what you’re seeing is a performance created specifically for this night, for this performance and for this community,” Sofranko said.

Tweet
Published in Theatre
More in this category: « Wish Granted: How Aladdin’s Genie found himself making musical magic Seduction Malfunction: ‘The Last of the Red Hot Lovers’ is a guidebook for how not to cheat »
Login to post comments
back to top