Seduction Malfunction: ‘The Last of the Red Hot Lovers’ is a guidebook for how not to cheat 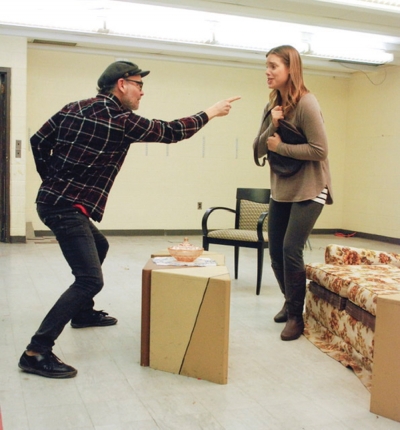 Shane German as Barney, Kristin Tomlin as Jeanette, rehearsing for "Last of the Red Hot Lovers." Photos by Terri Foley

Barney Cashman: middle-aged, happily married, sure; but to the only woman he’s ever been with, staring down mortality, gray and endlessly anchored — is it so wrong that he should get into trouble? For once, or maybe more, depending on his luck?

In 1969, Neil Simon’s The Last of the Red Hot Lovers premiered. It tells the story of Cashman, a restaurateur who does his best to seduce three women, none of them his wife. He’s practical, making his moves in his mother’s apartment while she’s away. Fifty years after its premiere, the play remains bracingly funny and sad. Jewish Theatre Grand Rapids will put it on Dec. 4 – 15 at Spectrum Theater.

Shane German, who plays Cashman, sees the character as a man in the grip of a midlife crisis. His attempts to sleep his way out of it are less than successful.

“Every encounter he tries, he fails miserably,” German said. “Whether it’s his own doing or the neuroses of the women he chooses.”

The women: Elaine, bold and upfront; Bobbi, a batty hippie; Jeannette, depressed and the best friend of Cashman’s wife. Jeannette tells him, “I think you’re sweet. I think you’re basically a good person. I do not think you’re physically attractive.”

Kristin Tomlin plays Jeannette. Asked if Simon writes women well, she said, “I feel like it depends. There are elements that are believable, but there are types, or tropes might be the right word. But all of those have elements where you say, ‘Oh my goodness, I know someone like that.’ Or ‘I’m like that.’”

“I think this play is unique because he made these three characters so extreme, to fuel the humor,” Director G.M. “Bud” Thompson said. “Is this necessarily Neil Simon’s take on women in general? I don’t know if I’d go that far.”

The humor is undeniable. Even on the page, the language crackles and fizzes. Still, there are sad, resonant moments. Cashman, frustrated by his lack of success, lets out a cri de coeur. He wants to live, and he’s not certain he will get to.

At one point, Jeannette describes how her husband tapped her on the shoulder in the middle of the night to let her know he was having an affair. “When he tapped me on the shoulder ... I thought he wanted me.”

“That has to be a moment for drama,” Thompson said. “We can’t play that as comedy. We have to let that moment be real and we have to feel her pain. And we have to bring the audience back to where there is some sunlight before we call it quits.”

In the end — to spoil the play, if a 50-year-old play can be spoiled — the lover calls his wife and invites her to the apartment. Perhaps she’ll come.

“The very end of the play is the Wizard of Oz ending: ‘If I ever go looking for my heart’s desire, I’ll look no further than my own backyard,’” Thompson said. “Maybe what he had with his wife was just nice, but nice is nice!”

Tweet
Published in Theatre
More in this category: « Tough Nut to Crack: Grand Rapids Ballet’s ‘The Nutcracker’ is a huge undertaking of artistic collaboration Review: ‘Aladdin’ takes you on a magical journey full of showstopping performances »
Login to post comments
back to top