Review: ‘Aladdin’ takes you on a magical journey full of showstopping performances 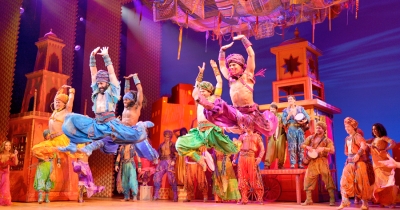 At the top of the show, before the curtain even rose, an orchestra featuring nine local musicians played an overture of songs from Aladdin, bringing to life the notes familiar to so many in Wharton Center’s audience.

There’s a comfort to hearing songs one has heard time and time again. At least that seemed to be the indication from all those dancing around me as last night’s show began.

That’s what’s inviting about a show like Aladdin, or really, most Disney productions: There’s something reassuring about seeing beloved characters from our past about to embark on an adventure.

Based on the 1992 animated film, Aladdin takes viewers to the city of Agrabah, where the street-smart, and very poor, Aladdin (Jonah Hoʻokano) is trying to get by. But then, he finds himself with a magical Genie (Korie Lee Blossey), who will grant him three wishes. So, what does Aladdin want? Money? Power? A brand-new pyramid? Nah. He just wants Princess Jasmine (Kaenaonālani Kekoa) to like him enough to marry him. Simple, right?

Of course not, which is how Aladdin finds himself asking for a wish where he must become someone he isn’t and eventually, go up against the super evil Jafar (Jonathan Weir). Evil laugh and partner-in-crime Iago (Reggie De Leon) included. Weir and Leon work off each other so splendidly and take their characters just to the edge of what could seem cartoonish in the wrong hands.

While there is much similarity in the story of the musical to the movie, there are also some changes, both big and small.

For starters, Abu the monkey, and Rajah, Jasmine’s tiger, are both gone completely, each being replaced by two separate trios. Aladdin now has three bros — Babkak (Zach Bencal, who has the show’s best comedic timing with an often monotone delivery), Omar (Ben Chavez), and Kassim (Colt Prattes, easily the best vocalist of the trio) — and Jasmine has three girlfriends to replace the tiger.

There’s also the music itself, with book by Chad Beguelin, music by Alan Menken, and lyrics by Howard Ashman, Tim Rice and Beguelin. All of the beloved hits are there, like “A Whole New World,” where the evening’s production values play a huge role, “Prince Ali,” and the show’s opener, “Arabian Nights.” But there are also new numbers too, including three songs that were written for the film then cut, and four brand-new hits.

As for the titular character, Hoʻokano has an excellent voice, showcased well in ballads like “Proud of Your Boy,” and is just cocky enough for you to believe his act when he becomes Prince Ali. His dazzling smile doesn’t hurt. There’s also a vulnerability lingering under the surface throughout his performance. He is, after all, a man living a lie and is convinced just being himself won’t be good enough for someone like Princess Jasmine (Kekoa, who has some comedic chops I was not expecting.)

Hoʻokano is excellent, but he isn’t the show’s star. That would be Blossey as the Genie.

From the second Blossey comes onstage, he is oozing charisma, with a baritone that hits the lowest of low notes, filling the theater to the corners with his velvety voice. And while he shines any time he gets to be onstage — you really can’t take your eyes off him, especially with all that glitter — it’s during his 11 o’clock number, Act I’s “Friend Like Me,” where he showcases every ounce of his talent.

During the nearly eight-minute number, Blossey not only sings and dances with ease but he does a cartwheel and magic tricks, all done with the humor the Genie is well known for. You can’t stop from smiling as the Genie is finally out of the lamp, and he is ready to show off.

The production knows this number is one of, if not, it’s best. When the “Friend Like Me” ended, there was a good 10-second applause. That might not sound like a lot, but during a musical — where the rest of the evening’s songs’ applauses came in around three or four seconds — 10 is a very, very long time. If the orchestra hadn’t started up again, audiences probably would’ve still been clapping.

Blossey deserved every single one of those claps. He also gets some of the show’s best one-liners, like during the opening number when he comments on how even the poor people look fabulous, which they do, thanks to costume designer Gregg Barnes.

Barnes has created some of the most breathtaking and sparkly costumes. (The rhinestone budget for this must have been huge.) Whether it be the clothes of Aladdin the street-rat, Prince Ali, the Genie, or the many stunning dresses, all worked brilliantly on the stage. Even when everyone had on the same color — like in a vital scene during Act II — the details are what your eye is drawn to. Did I mention all the glitter?

Speaking of Aladdin’s production values, Aladdin takes all of them to the next level. There’s six-time Tony Award winner Natasha Katz’s lighting design, making the stage look more colorful and bright than any production in recent memory. The colors she chose let audiences feel like they’re everywhere from the sandy desert to watching a sunrise on the roof with Aladdin and Jasmine. Bob Crowley’s scenic design lets the cast move seamlessly from the market village to the inside of the castle. The work Katz and Crowley must have done for “A Whole New World” makes you feel like you’re actually flying over the city with Aladdin and Jasmine.

We have amazing production values and songs you’ll love with a cast full of showstoppers, but it is true that Aladdin isn’t a show with much depth. Overall, Aladdin and Jasmine getting together doesn’t have enough build-up to feel earned and the resolution seems to happen too quickly. This isn’t a show that will have you contemplating society or having lengthy decisions with your friends.

This is a Disney production though, where everything is tied up in a nice bow by the end, as to be expected, and sometimes, that’s what people want in a production. Aladdin is a perfectly enjoyable show, and it’s the perfect excuse to escape for a few hours with a very talented group of performers singing and dancing their way across the stage. And you know what? Sometimes that’s just what we need, especially when there’s a magic carpet ride involved.

Tweet
Published in Theatre
More in this category: « Seduction Malfunction: ‘The Last of the Red Hot Lovers’ is a guidebook for how not to cheat Peaks & Valli's: 'Jersey Boys' celebrates the journey of the Four Seasons »
Login to post comments
back to top