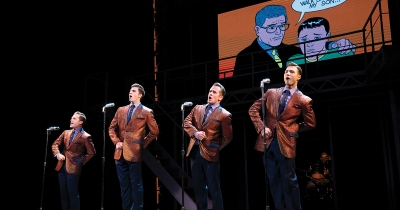 After a nearly two-year hiatus, Jersey Boys once again hits the road to share the story of Frankie Valli and the Four Seasons. The Tony- and Grammy-winning musical visits Miller Auditorium this month, bringing New Jersey rock ‘n’ roll all the way to West Michigan.

The musical is basically about four guys from the streets of New Jersey coming up in the 1960s, and they want to become a rock ‘n’ roll group, Jersey Boys actor Jon Hacker notes. “It’s their trials and tribulations of how they got the group together, were one of the best-selling groups of all time, made rock ‘n’ roll history, and were inducted in the Rock & Roll Hall of Fame.”

Hacker, who plays Frankie Valli in the production, said the group’s story and music are what really drew him to the role.

“I mean, ‘Can’t Take My Eyes Off You’ is one of the most iconic songs of all time. Just the thrill of getting to sing that was enough for me. I was sold at that point.”

The musical consists of the Four Seasons’ greatest hits, among them “Sherry,” “Can’t Take My Eyes Off You” and “Walk Like a Man.” While the prospect of playing the renowned musician is a bit daunting for Hacker, it’s ultimately a dream come true. Since starring in Jersey Boys, he’s had the pleasure of meeting Valli twice.

“I’m playing someone who is walking around and at any moment could come see me portray their life,” Hacker said. “It’s intimidating, but it’s humbling at the same time because I love him. He’s such an amazing man and he’s been through so much. Just being able to live that is incredible, knowing that he was actually there and living that is crazy to me.”

The show has been enjoyed by audiences all over the country — in fact, it’s not the first time Jersey Boys has come to Kalamazoo. For Miller Auditorium, this return show is a kickstart for the new year.

“We always try to look for a well-rounded season and Jersey Boys has been off the road and now it’s just coming back out,” said Thom Cooper, Miller Auditorium’s associate marketing director. “We were happy to be able to get it because our audiences love the show. We’ve had it here before and it’s always been a crowd favorite.”

Both Hacker and Cooper believe the popularity of the show is due to its celebrated music.

“I think the music is timeless, and the music in the show just keeps bringing people back to it, because every single song brings back a memory to people,” Hacker said. “I think that ends up being why people love the show and people keep coming back.

“Not only is it a great story about a rock ‘n’ roll group, but the songs bring you back to a time in your life of falling in love or going to a school dance.”

Tweet
Published in Theatre
More in this category: « Review: ‘Aladdin’ takes you on a magical journey full of showstopping performances New Desires: GR Civic brings a timeless Tennessee Williams classic back to the stage »
Login to post comments
back to top