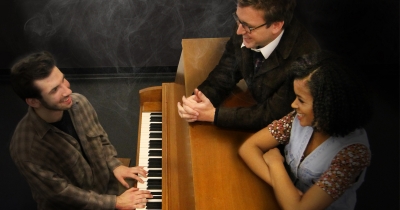 The Kalamazoo Civic’s production of “Tick, Tick . . . Boom!” is a blast from the past, a rocking homage to Generation X through one artist’s fear of turning 30 — entailing fears of failure, commitment, selling out, death. You know, the little things.

Larson himself performed “Tick, Tick . . . Boom!” as a one-man show, and posthumously, playwright David Auburn transformed it into a three-person show by adding two characters.

At the Civic’s Parish Theatre, under Michael P. Martin’s enthusiastic direction, three performers create a tremendous amount of energy with the help of a terrific on-stage rock band led by Lori Hatfield.

Despite some harmonizing glitches on opening night, the 90-minute show is quick, funny, with palpable angst and some strong performances. With smart design choices, this ensemble does a whole lot with very little, underscoring a major theme of the show: a commitment to creativity despite obstacle.

Jordan Bruner plays Jon, the lead, with passion; and though his emotionality can be one-note, he’s committed to that note. He also sings like a dream. The score is part homage to Sondheim, part rock, part pop, and utterly delightful pretty much whenever he’s involved.

Bri Edgerton is a playful yet at times demanding Susan, Jon’s girlfriend, and though she and Bruner don’t have electric chemistry, she proves her chops as a bold character actor, playing many side roles to the hilt.

Josh White, who plays Jon’s lifelong best friend Michael, creates a dynamic, complicated, loving relationship with Bruner. White is a gorgeous singer, a seasoned character actor (who also plays many roles beyond Michael with both subtlety and flair), and brings a terrific and much-needed depth of emotion to the stage.

And it’s an intimate stage, in the round, with the action unfolding in first-person vignettes on a platform designed by April Thomson around the band. The actors make terrific use of the space with a few carefully chosen props by Stacy Bartell and lit, often in affecting spotlights, designed by Katrina Baiocchi.

Costume Designer Liz Haas’s Doc Martens and flannels effectively evoke 1990 as do the references, many of which are now laughable: Jaw-dropping $50 Broadway show tickets and disillusion with the first President Bush among them.

It also possesses Larson’s trademark hopefulness and asking big questions of the audience. Though in 2020 they’re different questions about touching a different generation, what remains is the unquestionably moving quest to be oneself, true to one’s art, and to make a mark through that. To feel the fear of the ticking clock and do it anyway.

Tweet
Published in Theatre
More in this category: « Laughing Through the Tears: Actors' Theatre's 'Mary Jane' is highly emotional, yet decidedly unsentimental Review: ‘Hamilton’ in Grand Rapids goes above and beyond expectations »
Login to post comments
back to top