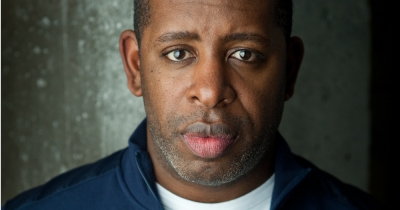 As Kahlil Ashanti ended his first performance of Basic Training, the audience’s reaction wasn’t quite what he had been expecting.

The audience was silent, apart from the sobbing.

“I thought, ‘Oh, crap, it sucks,’” Ashanti said about the performance, which was done in 45 minutes instead of an hour because of how quickly he spoke. “And then one clap at a time was this sort of wave of applause as people rose to their feet. That’s been the reaction ever sense.”

So, what kind of story is making audiences cry, laugh, and jump to their feet in applause? A very authentic one.

Over the course of an hour, Ashanti — who plays 23 characters, all based on real people he’s encountered — tells the story (with some breakdancing thrown in) of his experience in the U.S. Air Force, beginning with the night before he left for basic training when he was given some very surprising news.

“My mom let it slip that the guy who had been abusing me my entire life wasn’t my real dad. She swears she told me before, but I probably just forgot,” he said. “That’s the opening line of the show to this day.”

From there, it follows his time in the Air Force — more specifically, his time with the military entertainment troupe, Tops in Blue. Ashanti did five different tours with them, two as a dancer and stand-up comic, the other three as a tour manager to mentor cast members.

Being a part of Tops in Blue had a lasting effect on Ashanti. Since he had been a stand-up comic with them, he was used to writing material, but nothing as personal or deep as what he wrote in Basic Training. Now, as a father of three, he relates much more to his own material than he did as a single man traveling the world.

This is where Jeffrey Tambor — yes, the actor from Arrested Development and Transparent — comes in. Ashanti had been taking an acting class with him when the idea for Basic Training struck.

“The original idea that I had for Basic Training was, ‘Hey, I’m going to get on stage and be a funny, black guy.’ Jeffrey Tambor was like, ‘Yeah, I think Hollywood’s full of funny black guys,’” Ashanti said. “He was like, ‘Kahlil, what is the story you have to tell? Why is your story different than anybody else’s in this acting class?’”

Tambor’s advice forced Ashanti to go deeper with his writing and explore more about why he had joined the Air Force in the first place. It ended up being a deep dive into some of Ashanti’s most painful memories.

While some scenes are harder to watch than others, Ashanti still does his best to humanize even the worst people, including his stepdad, who used to make him and his brother stand at attention overnight. During this time in his childhood is when Ashanti found his skill for comedy by doing impressions to keep his brother from crying. Ashanti found out he could help people hurting by making them laugh.

But Ashanti makes it clear that no of this part of the play was done for the sake of people saying, “Oh, poor him.”

People clearly have felt that way since Basic Training premiered in 2004.

After that first performance in Los Angeles, he was connected with Hollywood producer Barry Josephson, who wanted to turn it into a film project. But due to the 2007 Writer’s Strike, that didn’t come to fruition. This didn’t stop Ashanti though.

Basic Training ended up setting ticket sales records, winning awards, and landing Ashanti in multiple newspapers. His time with those festivals got the attention of the Edinburgh Festival Fringe, which he was invited to and would go on to win the festival’s Scotsman Fringe First Award. The show also did a stint Off-Broadway, getting attention from the New York Times and becoming one of the newspaper’s New York Times Critics Picks.

“I just set out to tell my story onstage and the response from the audience warranted that it be told in many, many more places,” Ashanti said.

East Lansing can now be added to the list.

Tweet
Published in Theatre
More in this category: « Review: ‘Hamilton’ in Grand Rapids goes above and beyond expectations Fair Play »
Login to post comments
back to top