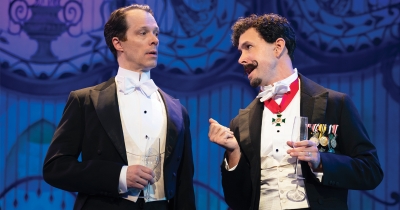 If Laird Mackintosh was going to see only one show this year, he would make it My Fair Lady.

Conveniently, he gets to see the show multiple times a week — and from the stage at that. Mackintosh is currently starring as Professor Henry Higgins in the musical’s national tour, which is making a stop at the Wharton Center at the end of the month.

When we spoke, the production was at the Kennedy Center in Washington D.C., the first real stop on the tour, and that newfound enthusiasm to finally be in front of an audience was evident.

“It’s been absolutely great, because one thing you never have when you’re rehearsing the show is an audience,” said Mackintosh, who began his career as a dancer in the National Ballet of Canada.

“The audience is kind of like the other character in the show, especially in a show like My Fair Lady that has a lot of comedy in it,” he said. “You get the response of the audience, which is terrific to hear.

“That is such a gift when you’re an actor, because it picks you up so much and it motivates you.”

The revival, directed by Bartlett Sher, follows Higgins, a linguistics professor who takes a bet to turn a struggling Cockney flower seller, Eliza Doolittle (played by Shereen Ahmed), into a proper lady at the turn of the 20th century. Even though the musical takes place in 1912, Mackintosh said it’s unbelievably relevant today.

“To be honest, you look at the story and think, ‘Wow, nothing has changed. We’re in exactly the same place,’” said Mackintosh, who has also played The Phantom and Monsieur André on Broadway.

My Fair Lady — which first premiered on Broadway in 1956 and is based on George Bernard Shaw’s Pygmalion — discusses class distinction, how men treat women, equality, and, maybe most importantly, how a young woman can make it in the world and gain the same opportunities as men.

As anyone who knows My Fair Lady will tell you, it’s a musical filled not only with laughs and relevant topics, but beautiful and memorable music as well, including classics like “The Rain in Spain,” “I Could’ve Danced All Night,” and “Wouldn’t It Be Lovely.”

“Every song in this show is so memorable,” he said. “That’s another thing that’s wonderful about performing in My Fair Lady. Almost every single person in the audience knows the music in this show and has a very strong memory of this show.”

That goes for Mackintosh, too.

When he was about 12, his parents — who weren’t musical theater buffs by any means — enjoyed the musical so much that his dad used to quote Professor Higgins’ lines.

Since the album was played so often, Mackintosh found himself falling in love with the music and even more in love with musicals.

“That’s what I mean when I say it’s part of people’s DNA,” Mackintosh said. “It’s almost like a cultural landmark. It’s a bookmark that people can point to a certain time in their life and they have a memory of My Fair Lady.”

Mackintosh is learning quickly from speaking with audiences after the show that many have memories from the 1964 film with Audrey Hepburn and Rex Harrison.

Knowing that does add a particular challenge to the role for Mackintosh, especially with getting people on board with his version of the brutally honest professor. But with so many different interpretations of Henry Higgins out there, how does he make it feel familiar yet authentic?

“It’s automatically your own, because you can’t really play anyone else,” Mackintosh said, adding that he wasn’t trying to do his best impression of Rex Harrison. “I think you can’t help but make a character your own. It’s you, up onstage playing it so the audience automatically gets something very different.”

In regards to the production, he thinks this version focuses more on Eliza than previous works. As an actor, Mackintosh felt this experience was different because the show’s director was really trying to pull back the layers and get under the surface of the material, delivering a very thoughtful interpretation.

“That’s what I think will make this show different, that it has been very deeply and carefully examined,” he said. “What that means for the audience is they get something that is very rich and layered.”

It also, hopefully, means audiences will leave the show and think and discuss the themes in it.

If they have a song or two from the musical stuck in their head, that’s just a bonus.

Tweet
Published in Theatre
More in this category: « ‘Basic Training’ is a profound one-man tour de force And Eat It, Too »
Login to post comments
back to top