And Eat It, Too 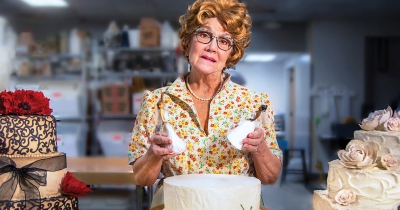 Theater may be a form of escapism, but it’s also a great way to ignite difficult conversations.

Terry D. Williams, director and member of the Farmers Alley Theatre’s Play Selection Committee, hopes to do just that with their February production, The Cake.

“That’s how we in the theater address controversial issues, putting them onstage, presenting both points of view and then maybe the audience will feel differently after they experience the show,” Williams said.

The Cake was written by Bekah Brunstetter, who works on the tearjerker This Is Us. In the play, Christian baker Della is asked to make a cake for an upcoming wedding. While excited at first, the feeling quickly disappears after finding out it’s for two women. She then declines the request.

If this situation sounds familiar, it’s based on a true story from a few years ago, when a Colorado baker refused to make a cake for a same-sex couple because of his religious beliefs. That famous case, Masterpiece Cakeshop v. Colorado Civil Rights Commission, made it all the way to the Supreme Court in 2018 before they ultimately sided with the baker. Brunstetter started the first draft of this in 2015, way before the case got that far.

The Cake takes a similar story but adds another element that complicates this decision for Della: One of the women in said wedding is the daughter of her best friend, who died five years ago.

Given her love for the young woman, Jen, this decision makes Della take a look at her own life and her own relationships, including the one with her husband, Tim.

“I think that just all of a sudden this makes her think about things she’s never really truly thought about,” said Zoe Vonder Haar, who plays the baker. “She’s just gone along with her religion and her husband’s feelings, and now she’s starting to think for herself.”

Throughout the show, Della’s eyes are opened more and more, and she starts to see the world a little less black and white. Farmers Alley wants The Cake to do the same for audiences.

“I hope we get patrons that aren’t necessarily traditional theatergoers, who are curious about this issue, and want to see how it’s played out,” said Williams.

Even though viewers might not agree with the Christian baker's choices, Brunstetter’s play asks that viewers try to see both sides of the story.

Williams mentioned that one of the best parts of The Cake is how believable these characters are — they’re people you could easily run into on your day-to-day.

“I think the beauty of this play is the willingness to have these discussions and debates onstage because they care about each other,” he said. “Otherwise, they would just say, ‘Well, that’s what I believe,’ and walk away.

“They’re willing to confront the issue in a responsible, sometimes argumentative way, but never to the point where they would avoid the topic and run away from it.”

Vonder Haar agreed and said her character may be opposed to the relationship, but throughout the play — which ended its Off-Broadway stint last spring — she realizes the love between them. She believes understanding others’ opinions, especially in today’s political climate, is very important.

“One doesn’t have to agree to be empathetic,” she said.

Simply listening to the opinions of others can make a world of difference.

Even though one of the play’s main topics is rather serious, Williams and Vonder Haar said it’s quite comedic.

“It’s so beautifully written,” Vonder Haar said about the show, which runs 90 minutes with no intermission. “It’s basically a comedy with really deep issues. I think the comedy of it all helps lighten it up. It’s not a preachy kind of play.

“It’s truly bringing up issues that we all have to deal with every day that sometimes we just block out because you don’t want to deal with it until it truly affects you.”

The play will feature real cake made by Sarkozy Bakery, alongside other community partnerships. There will be four talkbacks during the show’s run, each with a different organization, including WMU Office of LGBTQ Services, Out Front Kalamazoo, Queer Theatre Kalamazoo, CARES, and WMU Dept. of Gender and Women’s Studies.

The cast and director also will participate in the Q&As following those four specific performances. Like much else around this production, these talkbacks will hopefully inspire some tough conversations outside the theater.

“I think that’s one of the important things of the theater; not necessarily to change your mind at that performance or immediately after, but start pondering both sides of the issue in a way that maybe you couldn’t or wouldn’t have done if you hadn’t seen the show,” said Williams.

“I think she has a line about how everybody can come together for a piece of cake,” Vander Haar said. “So it’s kind of an icebreaker, maybe. Sit down, have a piece of cake, let’s just talk.”

Tweet
Published in Theatre
More in this category: « Fair Play Review: ‘Les Misérables’ remains one of the greatest shows to ever grace the stage »
Login to post comments
back to top