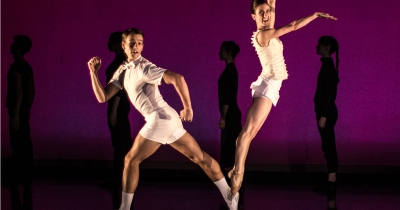 "Eternal Desire" is at the Grand Rapids Ballet. Photo by Trey McIntyre

The sold-out opening night crowd at Grand Rapids Ballet’s “Eternal Desire” reeceived the grace and beauty of classical ballet that extols the virtues of romantic love more overtly than perhaps any other art form.

With three world premieres created for the company, this eclectic program shows off the range of this evolving company, particularly its strengths in boundary-pushing contemporary dance under James Sofranko’s second year of artistic direction.

His choreography included the only pointe work in the performance, and was some of the most profoundly moving among the five pieces in this two-and-a-half hour show.

“A Dreamer,” accompanied on stage by the magnificent Eclectic String Music Ensemble up stage left, and inspired by the life and work of Stephen Hawking, is positively interstellar, creating a new language for communicating that which is beyond what the mind can comprehend.

Nine dancers defined by clean, crisp lines repeat the motif of grand jetes that appear to effortlessly float and hang mid-air. So much of their dancing is perfectly symmetrical and in tandem; and Nigel Tau, ostensibly as Hawking, appears to chase a pas de deux just out of his reach, until he succeeds in entering it, allowing it to become a pas de trois.

Such powerful symbolism abounds in this triumphant piece that invites the audience members to fully enter its concept without conscious language or thought. The sublime beauty four couples create in tableau leaves an indelible mark. This is the power of exceptional dance.

Sofranko’s “Romeo & Juliet Balcony Pas de Deux" precedes “A Dreamer” and is the only other dance performed en pointe in the entire program. Yuka Oba-Muschiana is a technically skillful Juliet, soft and jubilant; and Josue Justiz’s dancing as Romeo is the strongest performance in the entire show — his ecstatic beats and perfect pirouettes but two examples of his sharp and crisp technique. The choreography is playful, romantic, full of sweet lifts, and utterly enjoyable.

The other premiere here is Danielle Rowe’s “November,” a darkly cinematic, almost Hitchcockian exploration of love’s turbulence and demands for surrender and suffering. With two women and three men in three distinct sections, it’s a disjointed dance — part modern, part lyrical, part classical ballet — that makes use of an upstage mirror between parted curtains and a black box platform. It’s frantic, suspenseful, full of solo dancing with a mirror, rolling on the floor, partnering, and dancers mirroring each other; and the lights and music change dramatically. It’s clear there’s a narrative that wants to be told here, but it’s entirely unclear what that narrative is.

Penny Saunders’ “Give Me,” a flirty contemporary duet between Ednis Gomez and Nigel Tau, is set to Louis Armstrong’s familiar favorite song of the same name. It's full of coy shoulders and hips, masculine lifts, and a little breakdancing. It’s cute, and as the opening dance, serves as a little amuse bouche for the rest of the program.

The delightful “Wild Sweet Love” — the modern-influenced 2007 premiere from sought-after American choreographer Trey McIntyre, and titular piece from Grand Rapids Ballet’s 2018 season opener — closes the program with a changed cast who drive subtly different qualities in this rendition of the piece.

Though it still goes for the jugular of the mood swings of romantic love through the jubilance, fury and violence, as well as the heartbreak of marriage, this ensemble is bouncy and buoyant, and soloist Adriana Wagenveld brings levity through movement to the frustration that defines her role.

Set to a variety of contemporary pop and rock music, including familiar songs from Queen, Lou Reed, Roberta Flack, The Partridge Family, and The Zombies, a narrative emerges from a traditional bride dressed in a white tulle dress and gloves, who is joined by other brides, and ostensibly, their grooms dressed in what look like tennis whites.

Wonderfully fun and athletic, with acrobatics and tumbling, the dance is characterized by interesting movements, such as awe-inducing lifts and leaps with the women straddling the men's necks. Throughout the piece at various moments a cast of 15 marches behind a scrim and breaks into a run, as if trying to escape the institution that binds them.

There’s so much more to love and desire, of course, than what’s contained in traditional, heteronormative, romantic love so often expressed through iterations of courtships and marriage. Though this is the form of love most conventionally celebrated through classical ballet, Grand Rapids Ballet is a company evolving with the times, perhaps even with expressions of love itself — and “Eternal Desire” is a magnificent celebration not only of what this company can do, and what exceptional dance can communicate and inspire, but also of how stretching the boundaries of passion can be expansive for us all.

Tweet
Published in Theatre
More in this category: « Review: 'The Cake' is a delightful dive into life's tough choices Complex Conversations »
Login to post comments
back to top