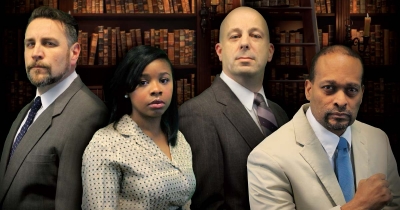 ‘Race’ asks the tough questions to build a stronger community

In the Kalamazoo Civic Theatre’s latest production, David Mamet’s Race running through March 14, Director Stephen Carver opens the dialogue for audience members to take a look at their own assumptions about race and create a more accepting environment where the community can learn from one another.

“Race in our society is seen by some as taboo, offensive or not appropriate, so we stay away from discussions on race. But it’s not just black and white,” Carver said. “What Mamet is doing is exploring why that is and why we can’t just have a dialogue so we can understand each other. That’s why we open a dialogue, so we can get a better understanding of the person opposite us and what their life is like, instead of making assumptions.”

Tackling provocative issues of sex, accusations and race, this play aims to challenge not only the community of West Michigan, but also the cast and crew.

“The most rewarding thing right now is to talk with the cast and have an open dialogue about the issues that race brings up for the characters that they’re playing,” Carver said.

As a white man, Carver came into the rehearsal process with full knowledge that he would never be able to understand the characters of a different race. “I cannot imagine I would know anything about what Henry or Susan — who are African-American — are going through, but I can work with the actors who are playing them and together we can figure out the best approach.”

Performed at the Parish Theatre in Kalamazoo, Race features actors Dustin Morton D.C., Ron Ware, Emirrora Austin and Scott Horn. The play centers on two lawyers who must defend a wealthy white executive charged with raping a black woman. When a new legal assistant gets involved with the case, numerous twists and turns will lead the story in a new direction.

Though the play is classified as a drama, Carver notes this play also has moments of thriller and black comedy.

“The humor in Race is pretty prevalent,” he said. “It’s meant to be a funny play, so we can disarm the topic a little bit and use the humor to leverage the seriousness of the subject. It’s one way of bringing an important subject in society to light and starting a community conversation.”

Because this play wants to inspire viewers to change their thought paradigms, Carver hints that the play does not give audience members a clear conclusion. “No one’s right and no one’s wrong; it’s meant to spur conversation. Good theater entertains you. Great theater makes you think.”

With complex issues and strong language used throughout the play, the Kalamazoo Civic Theatre recommends only mature audiences, ages 16 and up, see this play. While it may not be a family-friendly experience, it is a highly engaging story for anyone interested in social justice or the conversation of race.

“The play doesn’t just talk about one race,” Carver said. “It talks about everything — the Jewish community, the immigrant community, the white community and the black community. It tries to be all-encompassing.”

By putting the topic of race on the table, Carver hopes audiences leave the theater with a conversation starter to share with others, and with a greater appreciation of one another.

“When we can actually get to know each other, we can have a conversation that is meaningful, which can lead to a strong community,” Carver said.

“By taking a subject that is as pivotal and volatile as race, having an open conversation about it, and leaving the emotional issues out for a second, we can actually walk in the shoes of our fellow community members — and my hope is that it brings us closer together.”

Tweet
Published in Theatre
More in this category: « Review: With 'Eternal Desire,' GR Ballet transcends the expected Operatic Honors »
Login to post comments
back to top