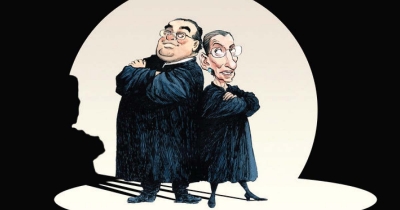 ‘Scalia/Ginsburg’ sings the comedic story of an unlikely friendship

It’s not, perhaps, the most obvious sell: The story of a friendship between two Supreme Court titans, one conservative and one liberal, done as a comic opera. Then again, Hamilton sounded nuts, too.

Scalia/Ginsburg tells the story of — you guessed it — the late Antonin Scalia, hero to the right and bugbear of the left, and Ruth Bader Ginsburg, who continues to fill the opposite roles. They agreed on more or less nothing, but bonded over mutual respect for the warp and woof of the other’s character, and over a shared love of opera.

Librettist-composer Derrick Wang wrote the opera. Being interested in music and legal theory and history, he took the hard way out, enrolling in both graduate school for music and law school. His twin passions aligned, resulting in this work.

Emilee Syrewicze, executive director of Opera Grand Rapids, is pleased to be helping premiere the opera; Grand Rapids will be among the first cities to stage it.

“A lot of people make the assumption that all the great operas have already been written, but the reality is that we have a number of creators who are redirecting their attention toward opera. I mean, there’s an opera based on The Handmaid’s Tale,” Syrewicze said.

“We like the apolitical nature of this. It’s nice to be able to have a subject matter that can draw from American politics but still maintain its status as an apolitical work. It’s kind of brilliant. It allows us to borrow from the political world without being contentious.”

“This is the time to do it,” added Jenifer Zetlan, who plays Ginsburg. “We do live in a really divisive time. And this is a show about finding commonalities.”

The opera has proven to be accessible to audience members. The music draws from classical works so well-known that anyone familiar with Bugs Bunny has heard at least some of them; the operatic precedent is well-established. And you don’t need to be able to tell your writ of certiorari from your ad litem to follow along.

It’s worth stressing: Scalia/Ginsburg is a comic opera. While it uses reality as a starting point, it departs from it whenever there’s a good laugh to be had. Many Supreme Court devotees know that Ginsburg works out; fewer, surely, expect to see her doing squats in court.

Zetlan’s role requires her to balance humor and caricature with the responsibility of playing someone who matters to her personally. “I’m a mother of a young daughter, and (Ginsburg) has done so much for women.”

She watched the documentary and studied videos, but Zetlan isn’t doing a straight impression: The show exaggerates the personalities of its lead characters; the bright, bubbly person onstage is not wholly removed from the real Ginsburg, but she does take on some aspects of the justice as meme: Notorious RBG.

Zetlan previously played the role for Opera Delaware. At the time, the ending was different; Scalia was still alive. After his death, Wang rewrote the ending, weaving poignancy into a show that was often a high-spirited romp. “People tell me that they didn’t expect to be laughing until they were suddenly crying,” Zetlan said.

Peter Drackley plays Scalia and, like the justice, has a large presence in every sense. Scalia brought his core convictions to his rulings, but he also brought a theatrical air and a love of language; no one else would have tossed out “pure applesauce” and “argle-bargle” with quite as much panache. Ginsburg once said that he could be so outrageous, it was all she could do not to burst out laughing during cases.

In the end, this is a story about staying true to your beliefs while having not just cordiality for, but true friendship with, someone whose beliefs vary sharply differ from your own. Zetlan often disagrees with her husband, but has not (as of this writing) pushed him into traffic.

“If you can’t disagree ardently with your colleagues about some issues of law and yet personally still be friends, get another job, for Pete’s sake,” Scalia once said. Extend that to politics in general and you have a message that bears repeating in this election year, plus laughter and good music. Who could disagree with that?

Tweet
Published in Theatre
More in this category: « Complex Conversations Review: 'Crowns' is a magnificent, rich celebration of endurance and expression »
Login to post comments
back to top