Review: 'Crowns' is a magnificent, rich celebration of endurance and expression 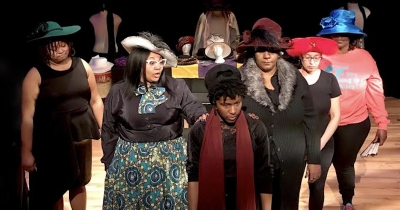 The great American writer James Baldwin’s quote “Your crown has been bought and paid for. All you must do is put it on” is interpreted in a biblical light, an acknowledgement of the suffering people of color endure.

And yet Regina Taylor’s play infused with gospel, “Crowns,” in production this weekend from Face Off Theater Company in Kalamazoo, turns Baldwin’s sentiment on its head, so to speak, celebrating that black women, indeed, have endured, and done so in style and in a fashion uniquely theirs, though also deeply rooted in ancestral history.

The play-with-music emerged in 2002 as an adaptation of “Crowns: Portraits of Black Women in Church Hats,” a book of photographs by Michael Cunningham with interviews of the behatted subjects by Craig Marberry. Taylor, a celebrated television actress, created composite characters based on the real-life women and added something of a plot through which they hang together as mentors for bereaved Yolanda, a high schooler from Brooklyn who’s been displaced to live with her grandmother in South Carolina after her brother was shot and killed. Though she in no way fits in with southern culture, she grows into herself and her faith as she learns from her elders about their ways and her roots, ultimately learning to put something on her head, as they insist, in a way that’s all her own.

Gracefully directed by Marissa Harrington, this show is remarkable for how rich and full the experience is despite the minimal effects. Six women and one man with a bunch of festive hats, a center stage platform, lights and sound by Sam Snow and astonishing music direction from Christie Coleman, create an unforgettable evening of wonderful storytelling of the oral tradition and gorgeous singing that rises far above sentimentality to deliver real heart.

Amid stomping, clapping, swaying and delivering knockout performances of gospel songs, the women share amusing anecdotes and poignant memories revolving around hats, often with “hattitude,” what they say a woman must cop to properly wear a hat.

Mostly church hats of the kind only women of a certain age wear anymore, a phenomenon which is addressed: it is an African tradition to adorn oneself for worship that slaves adapted when they gathered for church, the only place where they could congregate freely. And Civil Rights era women who weren’t allowed to shop in whites-only department stores took it as a point of pride and a status symbol to adorn their heads lavishly, flexing their hard-won rights.

Their language is musical in their storytelling, and this cast really shines in their singing. Brenda Earvin, Khadijah Brown, and Shauntrece Stokes each inspire goosebumps in the audience with their renditions of rousing gospels and spirituals. And Harrington’s inventive staging and understated choreography—the moving of bodies in lines, clusters, and circles—keep the performance moving and visually intriguing.

By the end of the show’s 90 minutes, there is no doubt whatsoever that, as they have declared, on the inside these women are queens. And we’re all the better for having been subject to their reign.