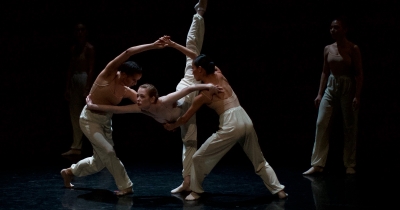 Jumpstart 2020 is an eclectic showcase of world premiere dances created and danced entirely by Grand Rapids Ballet dancers. It offers an eclectic mix of themes, moods, and styles, and the show is a hit among the company’s fans, judging by the spontaneous standing ovations opening night after several of the 10 pieces in this two-hour show.

The style of dance ranges from classical ballet to modern to contemporary, with the strongest dances succesfully blurring the line among them. In a pre-show discussion opening night, Artistic Director James Sofranko suggested that line has grown more blurry in time since the 1970s when Twyla Tharp set movement on Mikhail Baryshnikov for American Ballet Theatre. This blurriness is something Grand Rapids Ballet capitalizes on beautifully; therefore it is no surprise that its dancers, too, would choreograph along that blurred line.

While there most certainly are standouts among the dances, with an especially strong second act; there’s a wide range here between intent and delivery in other pieces. However, this is a performance dedicated to allowing new choreographers free rein to explore and discover. Even when what they create is less than stellar, that they’ve endeavored to create, especially with such skillful dancers, is to be commended.

Though there isn’t an overarching theme overtly linking the dances, many of the best of them address fear and loss to varying degrees, and a beautiful darkness seeps through much of the second act.

In Gretchen Steimle’s “Be Here Now,” Adriana Wagenveld undulates her way into a pas de deux in which she and Brandon Reiner glide and slide against each other in remarkable lifts, behaving almost as if they are the bow and strings moving against each other in the music by Portland Cello Project. Nathan Young dances a solo to big band music in the second section, and all three perform a lovely, dynamic pas de trois in the third section. Though it’s unclear until reading the program notes that they’re meant to represent the future, present, and past, it’s still a wonderfully moving dance that, indeed, brings us into the glorious present witnessing live dance that can only happen in the moment.

Ednis Gomez’s “Hushed,” takes a darker turn into a sophisticated ballet of seven dancers reminiscent of science fiction with dark music by Thom York, lights in blues and reds that call to mind the Netflix series “Stranger Things,” and robotic movements and a lone woman tossed and lifted among three couples.

Adriana Wagenveld’s “Departure//Reflection” continues the dark, electronica vibe and deepens the apocalyptic quality with wonderful dancing in an exploration of grief. Matthew Wenckowski’s acrobatic breakdance solo in which he handstands into somersaults among other impressive moves is a highlight among solos and pas de deux.

Though Yuka Oba-Muschiana’s “Death and the Maiden” is about coming to terms with death in a very different way, the series of tension-filled pas de deux with stunning lifts starkly lit as final tableaus reads as a romantic period piece. Regardless, it offers some of the strongest, most dramatic dancing of the evening.

Other noteworthy dances include James Cunningham’s “Butterfly Walking” in which eight bare-legged dancers in black leotards pick up sleeveless cloaks that are cleaved in the back like wings to signify their identities as butterflies meant to fly. The dance is full of twirling lifts and longing, a lovely piece.

Matthew Wenckowski’s intense “Such As You,” though a short pas de deus embedded in the middle of the first act, is one of the evening’s most memorable dances. Isaac Aoki and Nigel Taul control each other with subtle touches and responses as well as terrific musicality though the music by Brambles is ambient rather than melodic. They glide in socks, move close to the ground, share weight in surprising ways, and move together dynamically, utterly uplifted in tandem. If Greek wrestling were choreographed into a gorgeous dance, it might look something like this.

Jumpstart 2020 is at times riveting, and at other times feels a bit like a student recital. However, giving their dancers a showcase in which they can flex their muscles as choreographers is an excellent move on the part of the Grand Rapids Ballet, and it allows their eager audience an opportunity to see what they can do. Some of it this time around is well worth seeing, and some of it less so, but that’s all part of the creative process.

Tweet
Published in Theatre
More in this category: « Review: 'Race' is a rare play offering uncomfortably real conversations ‘Charlie and the Chocolate Factory’ is full of heart and pure imagination »
Login to post comments
back to top