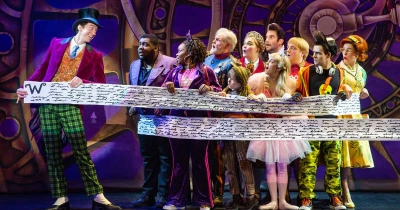 In an unpublished chapter of Charlie and the Chocolate Factory, candy magnate Willy Wonka leads a group of wide-eyed children into the alarmingly named Pounding and Cutting Room. There, a machine slices fudge into small squares. A wire strainer serves to catch any children who might slip, preventing them from being similarly chopped up. “It always catches them,” he reassures the children. “At least it always has up to now.”

Wonka’s dialogue, with its twist of the knife at the end, is representative of the novel as a whole, as well as everything that’s sprung from it, including the 1971 film starring Gene Wilder, all menace and wonder; the 2005 Tim Burton version, of which the less said the better; and the musical, which Broadway Grand Rapids is bringing to town starting Tuesday, March 10.

Cody Garcia, who plays Wonka, remembers seeing a stage version as a child. “I was so scared by what happened to Violet Beauregarde,” he told me. “I was crying. At the end, the actress playing her didn’t come out. I threw a tantrum; I wouldn’t calm down. My mom asked an usher, who said the actress had to rush to another show, but boy, that was something.”

He’s quick to point out that the musical, although it retains some of the book’s edge, is not traumatizing. “It’s not menacing. Although there’s one moment ... but I don’t want to give too much away.”

“The children aren’t in real danger,” said Caitlin Lester-Sams, who plays Mrs. Bucket, Charlie’s mother. “Willy Wonka’s a little off-putting, with all his chaos and manic energy. But it keeps you on the edge of your seat. You want to find out what happens next.”

The story’s darker elements haven’t muted its appeal; indeed, they might be part of it. Lester-Sams’ family owned a VHS copy of the earlier film. “We watched it all the time,” she said. Like the Wicked Witch of the West in Oz, or the Red Queen in Alice, the touch of dark wit in Charlie and the Chocolate Factory helps keep it from being overly sweet.

Children love the musical. Garcia recounts a bus of children chanting, “WILLY. WONKA. WILLY. WONKA.” He climbed aboard the bus, dressed in full Wonka regalia, and was met with screams of joy, playbills thrust in his face for autographs and selfie requests. “It was psychotic,” he said.

Despite the iconic pressure of the role, he feels less pressure to conform to audience’s expectations than to meet his own expectations of himself in the role. “It took me a while to see him as a person,” he said. “I used to see him as this ethereal character who couldn’t exist in our world. I still think that’s important, but it has to be grounded in reality.” In his favorite number, he takes Charlie up in the great glass elevator, singing of “The View From Here.”

Lester-Sams admires the way that the first act is set outside the factory. To understand why it all matters, she says, it’s important that the story starts at the beginning. “If you don’t know where he’s come from, it’s much less exciting to see him find the golden ticket.”

In perhaps the show’s most poignant moments, she sings Charlie a song called, “If Your Father Were Here.” It’s a song rife with absence but also comfort.

“There’s nothing better than curling up into the memory of somebody who isn’t with you anymore, especially if that person is a source of strength for you.” As she sings it, she’s aware of the need to hit her marks, and hit her notes, but she’s also putting herself in the shoes of someone who wants to help her kid feel better.

Asked why the story has lasted as long as it has, she points to the theme of imagination. “These days, especially with modern technology, we don’t give ourselves permission to imagine very often. Kids need time on their own, they need time outside, away from screens, so they can let their mind wander. I think our show helps them do it.”

“It’s a modern moral fairy tale,” Garcia said. “I love the role, I love the story. I just love everything about it.”

Tweet
Published in Theatre
More in this category: « Review: GR Ballet's Jumpstart 2020 lets dancers spread their wings Review: Despite everything, 'Lost in Yonkers' finds joy »
Login to post comments
back to top