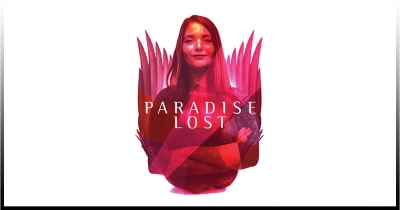 Kyle Los, Executive Director of Actors’ Theatre, saw the world premiere of Erin Shields’ Paradise Lost in Stratford. “I have not stopped dreaming or thinking about it since,” he said. Jean Bahle, who saw the premiere too, said, “It’s just mesmerizing and terrific and thought-provoking. Very funny. Moving. It just grabs you.”

The first time Bryanna Lee read the play, she wept. “I remember thinking, ‘This is theater.’”

If you haven’t heard of the play, you aren’t alone. That may be in part due to its country of origin; it’s a Canadian play and not many of them make it across the border. But it’s also a play out of time. Unlike so many plays that we dutifully attend, it isn’t a quiet domestic drama that sharply dramatizes social ills; it has no ingenue blinded by the bright lights of the heartless city. In short, it’s not a mirror — it’s a sculpture.

“I do not remember hearing the story of Adam and Eve for the first time,” Shields said. “It seems as though I have always known it.” In this sharp, deeply intelligent play, she tells that story again, adding contemporary humor, a modern sensibility and a female Satan.

The play begins with screams of terror. A lone light finds a figure in the darkness. Satan speaks: “I woke up on a lake of fire. Darkness visible was all I could see as I writhed with the pain of inexhaustible torment, and breathed in the stench of burning sulfur, charred flesh, singed hair, and melted wings, cursing the Almighty for sentencing us to Hell. I mean ... Wouldn’t you?”

Thus, elevated language wrestles with the everyday, the demonic with the demotic. This is worlds away from how we speak, but it’s finely calibrated, never leaning too far toward one side or the other, and it allows our imagination to fill in the blank spaces. It would work wonderfully as a radio drama, too.

Bahle, who plays Satan, views her responsibility not to act as an icon but as someone real. “She’s subject to the same foibles and weaknesses as the rest of us. God passed her over and she’s pissed off. That’s it, basically. And who hasn’t felt that? Someone else is favored and you’re chopped liver.”

Nursing her wounds, Satan makes for Earth. First, she must get through scary Death and through Sin, his mother. She also has to trick Uriel, an angel who’s a few feathers short of a full set of wings. On Earth, she finds Adam and Eve, two people as wide-eyed and blissful as EDM festival attendees. (Or, more to the point, newborns.)

Lee, who plays Eve, still had that sense of newness and curiosity in her. “I just had to rediscover it.” In the course of the play, she will move from — in William Blake’s words — innocence to experience. “I think she wants more, she’s more lustful, more selfish, and this is all rooted in the discovery of her ego ... Watching her explore the world after eating the apple is real and raw and relatable.”

It’s a demanding part, as is that of Adam. Shields asks these actors to inhabit, as adults, pure contentment and wonder, then to mature into complexity, in the course of a play and before our eyes. If successful, it will be a remarkable testament to the actors’ abilities, like a three-point basket made while blindfolded.

Paradise Lost contains a play-within-a-play, as angels stage a retelling of the battle of Heaven. It’s comical. Is it too comical?

“This could be a very campy play if we don’t do it right,” Perez said. “It’s a fine line. The angels aren’t actors; they don’t have an actor’s skills.” He said that it will be important to remember that, while they’re not exactly good at what they’re doing, they’re sincere — they mean all of it.

“It’s not a mockery of the whole thing,” Bahle said. And that’s important. “Here’s the thing I’ve come to think recently: It’s such a disservice to old myths to think of them as literal, as if that’s the only way they could be true.”

Whether there ever was an actual garden, the story remains one of the ways we understand who we are.

Tweet
Published in Theatre
More in this category: « Review: Despite everything, 'Lost in Yonkers' finds joy Remembering Ted Kistler »
Login to post comments
back to top