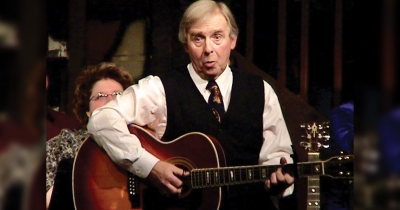 As a child, Jenifer Furney would often spend Saturday nights in Kalamazoo’s New Vic Theatre, as her parents and others tore down a set. That work went late; tech rehearsals for the next show would begin the next morning. “I would lie on a coach under my mom’s coat while they worked,” Furney said. “That building is as much home to me as my own home. I truly did grow up there.”

It was also where her father, Ted Kistler, spent much of his life before passing away in February. Kistler founded the theater with his wife, Mary Jo, more than 50 years ago, in 1966. “He just loved theater,” Furney said. “Loved music.”

Fresh out of high school, Kistler and his best friend, Jim Brignall, formed a folk duo, The Campus Singers. They toured the country and recorded two albums, Road of Blue and Live at the Fickle Pickle. The latter includes such songs as “The Sphinx Won’t Tell” and “Ain’t Gonna Study War No More.” On the cover, the men wear identical button-down shirts and look friendly but earnest.

Afterward, the two bought a coffee shop and ran that together. Kistler brought the same dedication and enthusiasm to the shop that he had to music; Brignall later gave up roasting beans for the challenges of law school. Kistler taught theater and pursued music on his own, but the folk scene fizzled out.

With his wife he formed The New Vic Theatre, a nonprofit entity and labor of love. At the time, the theater was something of an anomaly, putting on somewhat edgier fare, which suited Kistler.

“He had that artistic temperament,” Furney said. “It mellowed with age, thankfully.”

The New Vic’s Artistic Director, Kistler did what he had to in order to keep the doors open, even during difficult times.

Sometimes, that meant holding yard sales so the light bill could be paid. At times, he took on personal debt to keep The New Vic going. “He was tenacious.”

Talented in his own right, his greatest gift may have been casting. “His biggest genius was putting the right person in the right role. A lot of talented people came through our doors.” Some of them would go on to the bright lights of the big cities: New York, Chicago. Kistler worked to find ways to pay some performers, hoping that would keep their talents in Kalamazoo; for a while he was able to, but it wasn’t sustainable.

Ted Kistler is remembered as a warm, funny and charming man; someone who made the patrons of the theater feel as much a part of the family as the cast members themselves.

“Walking into the theater was like walking into a close friend’s living room.”

Since his death, many people — both those in the community and those who have left it — have told Furner how important her father’s encouragement was to them. James Sanford wrote on Facebook that Kistler was one of those rare people who come along and completely change your life.

A former theater critic, Sanford was tempted onto the stage by Kistler. He read and sang in an audition, not thinking it would lead to anything else, but it did: Kistler wanted him to perform in the marathon, 7-hour production of Nicholas Nickleby that The New Vic was to stage.

At the time, Sanford suffered for it; he had panic attacks and was told by friends that he was going to make a fool of himself. But Kistler had “unassailable confidence” in him. Because of that, he stuck with it. He’s performed in dozens of shows since.

Theater is in the blood; at any rate, it was for Furner. She remembers how badly, as a child, she wanted to be onstage herself. And how, with Joseph and the Amazing Technicolor Dreamcoat, she finally got to be. She was 7 years old.

“Only later did I realize how unusual my upbringing was,” she said. “Not everyone grew up like this.”

Today, Furner continues her parents’ legacy. She is the managing director of the New Vic Theatre. Like many, its doors are currently closed, but it will reopen. Like her father, she dreams of consistently paying performers, as a way to sustain them and to retain their talents locally.

In the meantime, she is trying to process the strange fact that her father is gone — but “gone” is the wrong word, maybe; he’s present in the legacy he left behind. Like her father, Furney is doing what she loves; working with others to provide the community members with shows that will linger in their memories, long after the sets are struck.