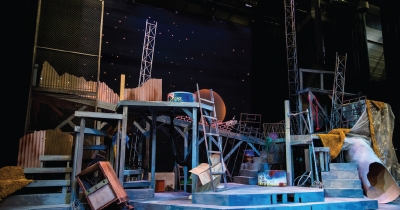 The talent onstage shouldn’t get all the love. Without the people working behind the scenes, they wouldn’t have a stage to stand on, much less a show to perform.

As a corrective then, and as a celebration, we’re launching a series called Backstage Bios — going beyond the curtain, where people work unseen to make performances happen.

We start this month with set designer Don Wilson, who’s been in the game for decades.

His father had a workshop in the basement. Growing up, Wilson was always doing something artistic. He loved that you could take something from your mind and make it physical. “That was always something I leaned into.”

Wilson got his start in theater because he was interested in a girl. The romance didn’t last, but his passion for theater did: Beginning with a summer theater internship in Adrian, he immersed himself in the world of theater. He majored in theater in college and moved to Grand Rapids in 2005.

In his role, he reports to both Circle Theatre and Aquinas College. He’s the building manager for the Performing Arts Center; Aquinas takes care of the lawn and the snow removal, but he’s responsible for surfacing issues and getting things fixed.

He’s also responsible for working with directors to help realize their vision. “I make sure that what we’re doing can be done on our stage and in our space.” Circle shows take place in a unique space, different from others in the area. Unlike a traditional proscenium theater with its “picture frame” quality, the Performing Arts Center has a 3/4 thrust stage. It takes work to make sure someone can get a good, unobstructed view from any seat in the house.

It also allows for more intimate performances. “They get to feel like a part of what’s happening,” Wilson said. “And often, they are. We can incorporate audience seating into the action. A little bit different and unique.”

Six months or longer prior to the show, he begins his work. The first step is to sketch a rough floor plan and to find photos for references. He works closely with the director. Any design elements need to be appropriate to the play, safe and efficient; audiences don’t want to wait five minutes between scenes while things get set up.

Once the design is approved, it needs to be implemented safely, precisely and well. Wilson has a team of paid interns in the summer, usually of college age. “It’s a great teaching experience.”

Rehearsals can require more changes. An actor or actress may not be comfortable with a design element or a director may have a change of mind when seeing the play come together. Wilson always takes that feedback and implements changes when able.

At this stage in his career, Wilson has worked on nearly 400 shows. One that sticks in his mind is Little Shop of Horrors. Thanks to a sponsorship, he ended up being able to rent one of the man-eating plants used in the national production. It was large enough to swallow a full-grown adult.

Most audience members might not notice his work. He’s of two minds about that. “If you don’t notice the set, that means it’s not intruding in the story. But there’s also something to be said about something so cool that it makes you sit up and take notice.”

Wilson is proud of the work he does and that Circle Theatre does together. “Overwhelmingly, we succeed at telling the story. We’re very proud of what we put out.”