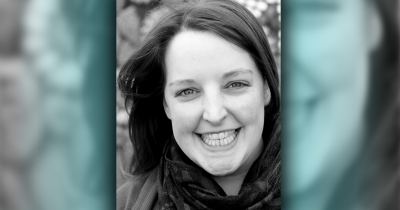 Don’t blame her; theater was in the family. Liz Merriman’s grandfather painted sets. Her grandmother helped with the painting and did props too. Liz’s father and sisters were all actors and her mother did costumes.

It was a theater house. Musical soundtracks played constantly. “To this day, I can’t watch West Side Story.”

A prodigal daughter, she’s worked in film and commercials for the past 16 years. At Compass College of Cinematic Arts, she helps bring in new students and helps students, graduates and alumni find work in the field.

“I spent many years away from theater,” she said. Still, if they get you young, you’re never gone for good. About two years ago, Actors’ Theatre Grand Rapids, looking for a prop designer, reached out to her.

“If anything is brought onstage, carried, thrown around, danced with, it’s a prop.” Depending on the needs of the show, her role can involve anything from helping costumers find hats and bags to helping scenic designers find furniture.

Her most challenging production may have been Freaky Friday. Every character had a prop. Not only that, she had to create a magical hourglass — something that would light up when it had to, break when it needed, and land harmlessly when dropped at other times. The solution involved construction foam, magnetized wood, and a lot of glitter. “I’ve moved since then,” she said. “I’m still finding glitter.”

Buying, assembling, and improving props is more complex than it sounds. There are budgetary concerns, safety concerns, and aesthetic concerns; you’re not finding a gun, you’re finding the right gun. Once the props are in place, she scrutinizes them in rehearsal. Are they comfortable for the actor to hold? Are they right for the scene? And when the show is running, she needs to evaluate props, and repair or replace as needed.

It’s changed not only how she shops — she’s always looking for something that could work, even if there isn’t a show in production or in pre-planning — but how she experiences shows. She’s quick to appreciate a well-chosen piece of glassware. But she can still lose herself in a good show.

Two weeks before our discussion, she suffered a terrible loss. “I recently had a death,” she said. Her child was stillborn. She told me this to explain to me why theater mattered to her, why the community she was a part of mattered so dearly. Some people may not know how to reach out in times of tragedy. Theater people do. And they did.

“More than any other community I’ve been a part of, theater people know how to weather a storm. You aren’t just colleagues. You’re not just another designer or actor. You’re in a family. There’s something so beautiful about that.”
That resiliency and interconnectedness give her full confidence that theater will rebound, despite its current dormancy. “You know, people said, ‘Oh, COVID hit, theater’s going to die. No it isn’t.” Vaudeville, films and theater thrived even during the Great Depression.

Tweet
Published in Theatre
More in this category: « Making Home Work Backstage Bios: Lighting the Way »
Login to post comments
back to top