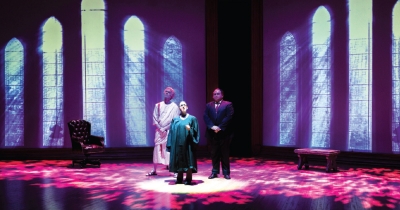 “Hey, they pay me to sit in the dark and watch shows.”

Michael Baumgarten, the second star of our Backstage Bios series, has provided lighting design for many Opera Grand Rapids productions, including The Magic Flute, The Mikado and this year’s Scalia/Ginsburg.

He started this work in college. “I knew I was going to be a lighting designer.” Asked what about it appealed to him, he said, “I have no earthly idea.” Whatever the allure, it propelled Baumgarten through his undergraduate degree, through a master’s degree earned at the Yale School of Drama, and into a career that is now in its fifth decade.

Lighting matters. If you have bad lighting, you notice it — you can’t see anything, or you see more than you want to. Good lighting can be subtle and naturalistic, although it doesn’t have to be.

“If you watched Hamilton and didn’t see the lighting, I don’t know what you were looking at,” Baumgarten said. “That’s the best piece of lighting I’d ever seen.” He singled out its contribution to the atmosphere, and the complexities of the way light was used on the turntables.

Baumgarten has worked with Opera Grand Rapids for the past few years. “My job is to come in and talk with the director and create lighting for the piece.” In recent years, it’s been not lighting alone, but video creation as well.

The process takes months. “For a performance in March, I’ll start talking to a director in November or December.”

How Baumgarten approaches the lighting depends on the director and his or her approach to the show. “Any opera could be done one way or another. A lot of it depends on scenery. A lot of times, the scenery gives you a sense of how the lighting should look.” A traditional production of Madame Butterfly probably wouldn’t benefit from neon lights, for instance.

With Scalia/Ginsburg, there was an almost museum or church-like quality to the light at times. That approach fit with the dignity of the Supreme Court while making the humor that much more unexpected.

When working on the design for a show, Baumgarten uses sketches and models. Once everything comes together, it’s important to see how it looks with bodies on the stage. Unlike in theater, when rehearsals are normally done on set, Baumgarten doesn’t often get the singers much in advance of the show itself. Instead, the industry uses “light walkers,” a term denoting people who volunteer to stand and move as the singers will, to allow the lighting designer to make adjustments or sigh in relief that it all went according to plan. In the final week of work, he finds himself putting in five or six 12-hour days.

He’s done about 450 operas at this point. One memory that has stayed fresh involves a 1986 touring production of Singin’ In the Rain. The doors of the theater in Richmond, Virginia, were too small for the rain deck, and the rain deck was important: The big number was to be performed on it. A wholly new deck had to be created.

Baumgarten went to lunch and returned in time to see the deck, hanging above the stage by cables, strain the cables to the point they gave up the ghost. “The deck nearly went through the stage.”

But the show went on. As the lead danced in what was to have been the big wet number, some remaining water on the stage happened to arc up. “The place went bananas.”

Without good lighting, who would have seen it?