Review: ‘Dracula’ Is Alive And Well At The Civic Theatre 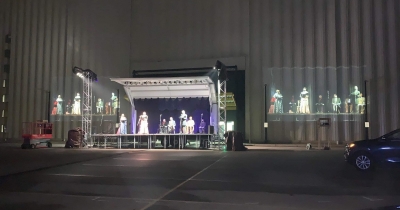 Just before sunset on Friday, October 23, I pulled my van into the parking lot of the DeltaPlex Arena, turned on my radio, and waited for the show to begin.

Actors and actresses in period costume took the stage, script books in hand. On the radio (over a faint, but discernible, tonal pulse), bells rang, strings played, and that old Transylvanian charmer began to speak. He read a letter written to Jonathan Harker, the English solicitor bound for Castle Dracula.

Harker, a confident, prissy man, soon realizes that something’s off. One clue is the count’s lack of reflection in Harker’s shaving mirror (in a comical moment, Dracula cavalierly tosses it out the window). Soon — too soon — Harker is reduced to desperation. A slow burn would have been better, but the play, which moves like a cheetah, doesn’t have time for one.

We next meet poor doomed Lucy Westenra, pursued by three suitors (“Why can’t they let a girl marry three men?”) and Wilhemina Murray, the love of Harker’s life. Both actresses were strong, although again they were given little time to flesh out their characters.

At breakneck speed, Renfield (played by a woman, as is Van Helsing) is introduced. The gothic dominoes begin to fall: soon necks are bitten, vessels are drained, and our heroes are pulling a coffin from the earth.

Throughout, the sound effects were terrific; they were a fine and effective throwback to radio dramas. I particularly liked the wet crunch as Dracula bit into Lucy’s neck. Gruesome!

Admirable too were the images projected onto the DeltaPlex’s exterior, which grew more visible as the sky darkened. They alternated between static images (a city street; a letter) and video of the onstage cast, larger and more ghostly than their corporeal selves.

The lighting worked well, picking out individuals sharply when needed, and darkening to purple, among other colors, to indicate scene changes. The costumes added to the atmosphere, and even the fact that the actors read from scripts didn’t harm the experience. Some scenes, particularly the most shocking, were wonderfully effective.

Nature cooperated, mostly. It never rained hard, but it did mist, requiring the use of windshield wipers (or squinting).

If not all the actors were perfect (Van Helsing stumbled over her lines occasionally, although the accent never slipped), some were particularly strong. Finest was Dracula himself; he laced into his louche tones occasional grunts, growls, and other animal noises, revealing the beast beneath the civilized veneer.

It was, in short, a good night of live theater, and a creative performance in a time when those are badly needed. At the end of the evening, the masked actors bowed. We honked our appreciation. The SUVs of the night — what music they make.

Tweet
Published in Theatre
More in this category: « Grand Rapids Ballet Announces Reimagined Season Backstage Bios: All On Board »
Login to post comments
back to top