Backstage Bios: All On Board 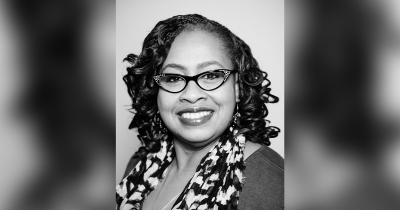 For those of us whose only contributions to theater are our ticket purchases and attention, show selection is an arcane process. Someone must be making the choices, we know; someone must have weighed this show against that. But who?

To find out, we spoke to Lynn Atkins-Rykert, president of Circle Theatre’s board. She spoke about the process with passion and humor, despite recovering from COVID-19 at the time.

Atkins-Rykert, the graduate programs coordinator for Aquinas College, hadn’t always considered herself a theater person. She liked the musicals — who doesn’t? — but that was about as far as she went.

But a colleague who served on Circle’s board invited her to a meet-and-greet session, and she was later asked to join the board. She decided to go for it, figuring it would be a great opportunity to get involved and see how it all works.

“I did a complete 180,” she said. “I’m all about it now. I see everything. I’ve even turned my husband into a theatergoer, and believe me, that was not an easy thing.”

She serves on the selection committee, which involves more thought than most people likely realize. It isn’t simply a matter of saying, “I like this show, and not that one.” Shows have to make sense for Circle’s stage (the shape of which, we’re confident you can guess).

They have to fit within the budget; big shows need to be balanced with less expensive ones. Classic shows should not have been performed recently. And as a courtesy, they maintain an awareness of shows other theaters are performing, careful not to step on any toes.

Having read the plays, the committee meets to decide what the season will be. No fistfights have erupted, which isn’t to say debates don’t get strenuous. One year, she advocated for To Kill A Mockingbird, only to be disappointed when the committee declined to stage it. “Next season, I lovingly suggested we take another look.” They did, and the show was terrific.

By the end of July, they’ve chosen three musicals and two plays. The ideal season kicks off with a showstopper, moves into three well-chosen shows that flow naturally into each other, and ends with a bang. In August, the board votes whether to approve.

Those in the know, bound by confidentiality agreements and their consciences, keep the decisions to themselves until the annual season announcement. In normal times, this takes place at a local venue, complete with food, drinks, games, prizes and entertainment. It’s an event. “We like the big reveal.”

Once the season has begun, Circle polls the community to see what they might be interested in next season. Shows get added to the master list; if they survive the winnowing process, they’ll get staged.

For Atkins-Rykert, part of the joy has been discovering all that goes into live theater. “I didn’t know until I became a board member that the costume shop does everything, down to painting shoes. Or that actors do their own makeup. Come on, we have a wig maker! There are so many things that need to come together.”

Finally, she recognizes that these are difficult times. People in the community have reached out to let her know that they’re sad, if not depressed. “‘This is what we look forward to,’ they tell me. And for someone social like me, it’s been tough.”

A silver lining has been the support the community has offered. Circle Theatre has held fundraising concerts and movie screenings. Referring to the latter, she said, “Could people watch Rocky Horror Picture Show at home? Absolutely. But to be out there among other people, there’s just something about that. I was so touched that people wanted to come and do that to support us.”

One selection we can be confident the committee would never have made is the pandemic itself. That said, when Circle reopens its doors (as it is slated to on May 6), it will be to patrons experiencing more than the usual amount of gratitude. Bring handkerchiefs.

Tweet
Published in Theatre
More in this category: « Review: ‘Dracula’ Is Alive And Well At The Civic Theatre
Login to post comments
back to top