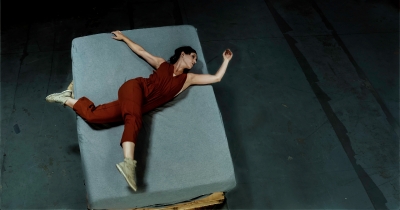 'Dear Flamingo' performed by Dance in the Annex & ArtPeers at RADFest 2021. Photo courtesy of Seth Thompson/ArtPeers.

No doubt this past weekend’s 12th Regional Annual Dance Festival hosted by Wellspring Cori Terry & Dancers was a balm to the pandemic-weary dance lovers who opted in to the virtual event.

In addition to evening performances on Friday and Saturday nights, RADfest offered both live and asynchronous content, much of which provided opportunity for interaction between audience and presenters, including master classes, artist talks, and post-performance talkbacks.

And it worked beautifully, providing an immersive and interactive space all about dance, dedicated to experimentation, exploration, and conversation, designed for those of us who have missed it terribly in the socially-distant world in which we’ve been living for the past year.

That’s not to say it was all pleasing or delightful, but that’s not what RADfest is necessarily about. Many of the dances in the short works series were conceptual, puzzling at best, painful to watch at worst, and pushed the boundaries of what dance is and what it is for. But on the whole, the questions raised and the way they were raised are utterly worthwhile.

In other words, the tyranny of beauty (by which I, admittedly, am at least partially unduly influenced) had little place here. Yet there was relief in that. For how appropriate is it, really, to celebrate beauty at this moment in time? And yet, how much more apocalyptic suggestion and nuance can we take amid life as we’ve collectively known it for a year?

Rachel Harris walked this razor’s edge with the chosen pieces and curation of this event, particularly the short works performance series’, which ricocheted from lyrical to contemporary to street dance, blurring boundaries among sub genres of dance. Some pieces were simple, single-camera, single-angle, recordings of stage performances past, complete with audience members; and others offered screen dances with deliberate and skillful camera work, at times with the dancers playing with camera as audience, begging the question: is this dance or is this performance art? At this moment does there need to be a line drawn between the two?

And yet, beauty defined by the beholder abounded, as did fascinating play with film, existential questions about life and death and gender identity, at times, even, with a sense of humor.

As is tradition, the kick-off performance of the series Friday night came from Cori Terry & Dancers, who celebrate their 40th anniversary this year. Their “Like a Storm” offered a lovely, lyrical, balletic experiment in weight sharing and balancing that was gentle and plodding to start and builds as gestures grow larger, with dancers eventually leaping and inverting until, eventually, they stand and swirl in place, only to twirl off the stage. Like a storm, indeed. Perhaps as a metaphor for COVID-19?

We couldn’t exactly say that with words, though, and dance as an expression of what cannot be expressed in words was explored throughout the pieces on offer both nights.

Conceptual dances that made use of filmic device in clever ways Friday night included Karley Wasaff’s “XwhY,” a performance-art like piece that rages against gender norms and whose technique lay largely in the camera work. Difficult yet compelling to watch, in the piece Wasaff writhes around and touches her body adorned in red X’s over nipples and flesh-colored thong underwear; they make other X’s on their body with red lip gloss then smears them; they put their hands in their mouth while appearing to scream; they flick their thumb from behind their teeth as a motif; ultimately landing on a rock in Central Park, vogueing. A statement that despite the rage, and the suffering, there is joy and freedom in reclamation of one’s body.

Dmitri Peskov’s “Whatever Makes You Empty” also employs a deliberately moving, shifting camera that pans out and in, from various vantage points including overhead, allowing the dancer to manipulate his face adorned with various masks in addition to his largely unclothed body that, at turns, flexes, undulates, twirls, and screams amid a spoken-word poem in Russian. A visual and aural existential crisis on display in a void-like space. If not a work of art for this moment, then when?

Saturday’s performance offered more conceptual screen dance in the form of Irene Hsiao’s “Transformation” that made use of multiple images of the masked dancer: seated, standing, and projected onto a wall, as well as a white umbrella as prop. And more existential dread in the post-apocalyptic “Wasteland” from Chicago Repertory Ballet. Again, at times the pieces most challenging to watch turned out to be the most evocative.

Though much-needed levity arrived in Kate Corby’s “dancelikeaman,” a delightfully funny and yet poignant and lovely pas de deus between two men with unapologetic dad bods wearing tube socks and head bands who speak to each other as if they were women in “Sex and the City.” It exposes the ridiculousness of toxic masculinity and gender norms in a light-hearted yet smart and deeply effecting way. Also with He-Man and G.I. Joe props.

The finales from both nights were each stunning in their own right. “Lit-anies” by Crystal Michelle Perkins performed by South Side Chicago Dance Theatre offered an ecstatic and beautiful spirited work from six dancers who are at once incredibly agile, grounded, and athletic. Their stunning physicality builds in energy and keeps the focus on their bodies dressed in white with black masks.

In Alice Blumenfeld and Aurie Hsu’s “Shifting Reflections” the two dancers mirror each other, one holding a fan and the other as if a fan with winged arms. In this mesmerizing dance the costumes and dance are inextricable, the two dancers complementing and heightening each other’s effects. Gorgeous.

How these dances, among the many others that rounded out the two programs, might have landed had they been performed live, with the energy exchange of an audience, is impossible to know. And for that we shall continue to mourn. However, in the meantime, this year’s RADfest is utterly praiseworthy, a testament to the passion and intrinsic creative problem solving abilities of artists, as well as to the audience members who clamor for their work.

Tweet
Published in Theatre
More in this category: « Backstage Bios: All On Board Review: With 'Collective Force,' GR Ballet Innovates and Pioneers »
Login to post comments
back to top