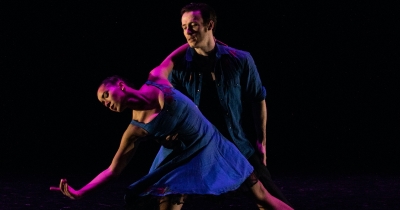 "In Dreams," a piece from "Collective Force" by Grand Rapids Ballet. Photo by Ray Nard Imagemaker

The world’s wild shifts and changes over the past year have required all of us to pivot and adapt, and the arts and the way we interact with them are no exception. Live performance especially has taken a hit, and with increased screen time in practically all areas of life, a mere shift from stage to screen for audiences hasn’t exactly cut it.

However, in “Collective Force”, the third performance of The Grand Rapids Ballet’s all-virtual season “Moving Beyond”, the company has indeed proven their resilience and creative ability to offer something vital amid peculiar, fearful times.

In this one-hour presentation — offered as an on-demand recording to subscribers and ticket holders over the course of last weekend — The Grand Rapids Ballet presented terrific variety in style, meaning and evocation with nine dance works, four of which were world premieres, all set by their respective choreographers from all over the world via Zoom. And in the best among the pieces, the very use of screens and what they make possible, was explored to magnificent effect.

Most notably in Artistic Director James Sofranko’s “Point of You”, a magnificent collaboration with local cellist Jordan Hamilton, a beautiful and fascinating experiment in movement and technology.

Hamilton, seated and masked, played on stage using a loop pedal that allowed him to create a magnificent, rich, full, and at times atmospheric soundtrack alone with his cello. He was positioned next to a screen onto which images of three dancers were projected, sometimes in real time, with an iPhone camera as the dance was unfolding, and other times with tandem recordings of the pas de deus and break-dance-inspired interludes happening live, simultaneously.

The dancers interacted with the changing projected images, reflecting life, beautifully, back to the audience as we interacted with yet another screen—and yet differently so. In effect, it was a pas de quatre, including three dancers and the camera that made possible live projections as a very real part of the dance that created new perspective on many levels. Quite literally in one moment, as Yuko Horisawa turned the camera on herself while being lifted high into the air by Isaac Aoki, boldly showing the audience a part of the dance to which we’d never before had access.

Though having to interact through screens in most areas of life may seem to have cultivated passivity, in many ways this was the rare example of increased engagement through screens.

By far, this world premiere was the highlight of “Collective Force”, a conceptual piece rooted heavily in classical vocabulary and yet made new—without losing the best of the tradition—for changing times, stretching the boundaries of what’s possible.

Of course, the rest of the show also achieved that same stretch of the imagination by its mere existence — and the dancing and the dances from exceptional choreographers including world premieres from Edwaard Liang, Jennifer Archibald, and Penny Saunders; as well as excerpts from works by Danielle Rowe, Katarzyna Skarpetowska, Amy Seiwert, Adam Hougland, and Trey McIntyre, were perfectly exquisite. At turns sharp and dramatic, classical and lilting, sweet and swelling, fluid and robotic, with vivacious virtuosos and terrific vulnerability.

As each piece was coached via Zoom, they were limited in scope, largely pas de deux, with a few dances employing up to five dancers; however, all of which offered exceptional quality, in dance and dancing as well as technical design and highly professional camera work (from SALT Creative Solutions) — with the added benefit of greater intimacy and intensity of emotion transferred, thanks to a closer view than that one might have access to in even the best of house seats in the Peter Martin Wege Theatre.

In a “Cocktails and Choreographers” bonus segment, Artistic Director James Sofranko interviewed choreographer Trey McIntyre (whose homage to Roy Orbison “In Dreams” was offered in excerpt as the closing piece of the show) and they discussed the possibility that the marriage between dance and technology may very well be a “new medium in its infancy”, especially as it may be transferred and consumed through small screens, such as smart phones, and “it’s a moment of great experimentation.”

Though McIntyre suggested we don’t yet know what’s compelling about dance in this experimental format, The Grand Rapids Ballet has certainly given us a taste, as well as real hope and anticipation for what’s to come.