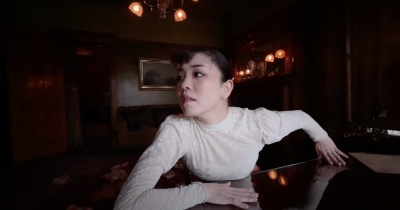 Still from "Sol and Luna," choreographed and filmed by Yuka Oba-Muschiana at the Voigt House Victorian Museum.

As the weather finally turns to spring in Southwest Michigan and we look to spend more time outside and less in front of our screens, watching what otherwise would have been a live performance on the computer may be the last thing people thought of doing this weekend.

If so, they seriously missed out.

The Grand Rapids Ballet offered their final performance of the 2020-2021 all-virtual season with “jumpstart: on film.” Artistic Director James Sofranko created the annual tradition of “jumpstart” in his first season at Grand Rapids Ballet in 2019 to offer company dancers an opportunity to choreograph and showcase their new works on stage. Every year it has been a terrific success, a wildly creative endeavor in which audience members enjoy the diversity of voices and vision and skill among the dancers in new and fresh ways.

But this year, the dancer-choreographers’ creative stakes were even higher and the challenges multiplied. Not only did they choreograph new works amid quarantine; they also instantly became directors, cinematographers, editors, costume designers, and producers. They literally held the cameras that captured the films in the program. And to state the obvious, dance films are a tangential but quite different art form than dance performed live on stage.

Though the nine dances of this program varied widely in approach and product, with some focusing on homage to classical ballet, others utilizing intricate camera work and effects as well as perhaps as much acting as dance, and others filmed on location, deliberately drawing the audience out of a traditional performance space and into the world beyond the theater, together they offered a truly inspiring program, well worth staying in and in front of the computer for another hour.

The opening dance, “Vivace", by Nicole Reehorst and Nathan Young, is an homage to Jules Perrot’s 19th Century Grand Pas de Quatre in that each of the four dancers, wearing traditionallclassical ballet costumes including long, pale blue tutus, were each highlighted in solos that celebrate their distinct personalities, punctuated by lively, joyful dancing together and pausing in tableau.

Adriana Wagenveld’s sensual and lovely “Passing Through” draws on classical ballet movement but shifts from modern-influenced solo to pas de deux full of gliding lifts that remains wonderfully earth bound at the same time. Sarah Marley’s extensions are impressive and Nathan Young is a wonderful partner to her.

Also in homage to classical ballet, Isaac Aoki and Madison Massara's “Two Swans” choreography drew inspiration (and the music) from “The Dying Swan,” but transforms it into a stunning duet between Aoki and Massara that takes place on what looks like a pier on Lake Michigan during sunset. Their gorgeous swan shapes and lifts are recognizable yet made new, and the camera work provides lovely closeups and shots at a distance in which their silhouettes are illuminated by the most beautiful lighting design imaginable.

Other dances shot on location include Aoki’s “At First Sight,” inspired by dance dreams he experienced at the start of the pandemic and took the dancers to a windy sand dune beneath a perfectly blue sky; Yuki Oba-Muschiana’s “Sol and Luna,” which focuses very much on storytelling and intricate camera work inside the Voigt House Victorian Museum, soars in one particular pas de deux performed exquisitely on a landing with stained glass as a backdrop by James Cunningham and Yuko Horisawa; “Created by Circumstance” by Gretchen Steimle, which explores themes of homelessness in various iconic Grand Rapids places and spaces, is wonderfully ambitious, visually appealing, and set to spirituals and spoken word performed by musicians who have their own stories of homelessness.

Though most surprisingly moving was Matthew Wenckowski’s exploration of the looking back that takes place at a relationship’s end. In the moody and pretty “Until Then,” dancers Emily Reed and Nigel Tau walk barefoot on pavement and move off into a grassy field under a gray sky; they circle each other with foreheads together as a motif; they lie in the grass and lean on each other, then the film transitions from the outdoors to a starkly lit stage. It’s more film than dance, but the yearning and sorrow it communicates is palpable.

Nigel Tau’s hypnotic “Dexterous, Sinistral” and James Cunningham’s dramatic “Evanescent Impressions” deliberately played with filmic devices and techniques, with dancers moving in mirror images to each other and themselves; and film imprints allowing dancers to perform shadow dances next to themselves dancing other choreography in an exploration of public personas and internal selves. Both presented terrific visual feats in both dance and film.

That expansion from dancer to choreographer to filmmaker, the exploration of what’s possible, the incredible pursuit of art amid the terrific constraints of the pandemic that rendered most live performers without an income if not a way to express themselves, is perhaps what is most inspiring about this year’s “jumpstart: on film.” And though there is the promise of a return to the Peter Martin Wege Theatre for performances next season, these films also provide the promise of new life and boundless creativity for the Grand Rapids Ballet.

Tweet
Published in Theatre
More in this category: « Review: With 'Collective Force,' GR Ballet Innovates and Pioneers Review: Face Off Theatre's Return Was a Revelation »
Login to post comments
back to top