Review: Face Off Theatre's Return Was a Revelation 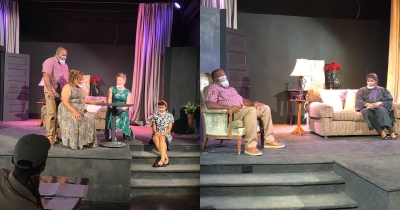 Face Off Theatre's "I Am Grace." Courtesy Photos

In Hollywood, Calif. many old movie theaters have been converted into churches. For Face Off Theatre Company in Kalamazoo, a former church is now their home in Dormouse Theatre.

Based on their first performance in the new space, local playwright Vickie G. Hampton’s “I Am Grace,” it’s a fitting transformation.

The company has been workshopping the new play which was an “A-Lister” in the 2017 National Black Theater Festival for several years, and as the company’s first in-person live theatre offering of their 2021 season, it’s uniquely powerful, the perfect theater for this moment.

A dynamic family drama set in the 1940s, “I Am Grace” tells the story of an African-American girl and her family’s dilemmas after she is raped by a wealthy white boy and becomes pregnant. Each member of the family expresses their feelings about the tragic injustice—from rage to fear to compassion—while also under the influence of their pastor’s guidance as well as the beliefs of the white boy’s mother.

In short, it’s an incredibly smart play, a phenomenal drama that raises questions about race, gender, class, morality, faith, and healing with even more profundity than the very real injustices of today’s news cycles—because we get to go deep into the inner workings as well as revisit a past cultural moment that seems to be on repeat: systemic racism and violence.

But on this stage there is redemption, and it is satisfying beyond belief.

It was simply a thrill to be audience to this talented cast and to experience the joy of live theatre up close and personal again. The energy exchange and connection is real, reminding us how terribly we’ve missed this.

The cast of eight wore transparent masks that allowed them to be heard and their faces fully seen, and with socially distanced seating in the wide-open space of a high-ceilinged former church with a false proscenium, the indoor event felt completely safe, as if we were all very mindfully cared for.

As for the performance itself, making his directorial debut, Este’Fan Kizer, a long-time Kalamazoo performer with Face Off, among many other theaters, made fantastic choices, from an ideal cast to delineating space to making the action move and bringing each scene and character to life with terrific energy, carefully-chosen physical gestures, and perfect stillnesses with just the right touch.

The actors universally portrayed their archetypal characters with aplomb, and their emotions were palpable: from Derek Miller’s rage as Grace’s brother, to Khadijah Brown’s drive and resentment as Grace’s mother, to Nicki Poer’s indignant self righteousness and unchecked privilege that softened with her own vulnerability as the white grandmother-to-be, to Aija Hodges’ Grace, who makes good on the promise of her name, the complexities ran deep though the authentic feelings danced magnificently on the surface.

To say “I Am Grace” as the premiere live theatre offering in Kalamazoo after quarantine was a religious experience would not be an overstatement among the live theatre worshippers among us. The perfect combination of what we want and what we need, this show, right now, is the greatest gift Face Off Theatre could have given us.

I Am Grace
Face Off Theatre
1030 Portage Street #3008, Kalamazoo
faceofftheatre.com

Tweet
Published in Theatre
More in this category: « Review: GR Ballet Presents a Collection of Visual Feats
Login to post comments
back to top