Review: 'Shout! The MOD Musical' Is a Triumphant Return of Live Theater 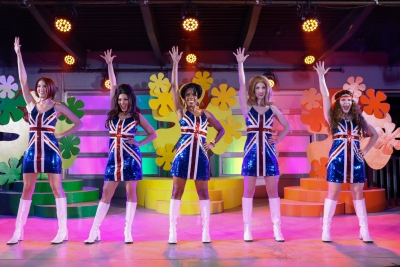 "Shout! The MOD Musical" at Saugatuck Center for the Arts. Courtesy Photo

Live theater is back, and at Mason Street Warehouse/Saugatuck Center for the Arts, it’s outside at the lakeshore, and everything we could hope for.

Shout! The Mod Musical, the 2006 jukebox musical created by Phillip George, David Lowenstein and Peter Charles Morris, takes us back to the feel-good ‘60s in the most vibrant, colorful of ways. In it, five archetypal characters donning spectacular minidresses and vinyl knee-high boots belt out the most memorable Brit-pop tunes made famous by the likes of Dusty Springfield, Petula Clark, and Shirley Bassey peppered with bits of dialogue full of delightful innuendo and silly puns.

And in Saugatuck nearly everyone in the crowd sings along.

Such is the joy of this light-hearted production directed with aplomb by Kurt Stamm that genuinely moves us.

The characters are meant to represent archetypes of the era: the people-pleasing housewife who’s never as happy as she seems, aka “domestic” and “in denial” (Tess Marshall); the bitchy fashion plate with her Vidal Sassoon bob, aka “too beautiful for friends” (Evan Bertram); the sweet nerdy “big mess” of a Georgie Girl (Katie Fay Francis); the Beatles-obsessed American (Zuri Washington), and the free-wheeling, free-loving tart, aka “a bit of a slut” (Amanda Robles). A voiced-over narrator describes them as “all different but with one thing on their minds—love.”

Though they are named only by their representative colors, each actress here makes her character so distinct, so funny in her own right, and moves and sings so well, we can’t help but see ourselves in her—and be seduced by her individual charms.

The narrative hangs on the emerging annual issues of Shout magazine, a fictional rag focused on laughable ladies’ concerns such as beauty tips punctuated by an advice columnist whose answer to every question—from self consciousness to failing marriage to questioning sexuality to domestic violence—is for women to make themselves prettier. To their credit, the women aren’t buying it, and though the advice doesn’t change over the years represented (1962-1970), the women do. Their evolution is that of feminism’s second wave—without any real politicization (beyond a nod to the sexual revolution) or deliberate representation of women’s liberation and civil rights, though it all takes place against that backdrop.

Their changes as well as those of the times are shown visually largely through stunning costumes by Darlene Veenstra with wigs designed by James Leppa.

Playful choreography from Kurt Stamm and Jay Gamboa is reminiscent of the times, makes use of percussive instruments beautifully, and paired with the really smart, pleasant medleys that never drag always gives us something magnificent to see despite minimal props and set. Though Jeremy Barnett’s elegant set of bold, individual platforms to showcase the women is wonderfully effective, and Cameron M. Griffiths’ fantastic sound design does a lot of heavy lifting for creating props in our imaginations. Jen Kules’ lighting design dances with the sunset and milks the vivid colors for all they’re worth.

And yet he focus, naturally, is on those beloved songs, and the memories they inspire for the audience: “Downtown,” “Son of a Preacher Man,” “To Sir With Love,” “These Boots Were Made for Walking,” and, of course, “Shout!” which literally gets people dancing in and out of their seats, among many, many others.

They’re especially wonderful thanks to the performers’ enormous, fantastic, distinct voices—each given several solos in which they shine—accompanied by a killer band under Tom Vendafreddo’s terrific musical direction. And amazingly, it all sounds great, despite being performed outside. The women are magnificent soloists and also create dynamic, soulful harmonies that will give you chills.

And though the story is mostly silly, fun, and a little bit bawdy, there’s real depth here as well. Each character comes into her own and makes the shift from looking for love outside herself to loving herself—and each of these actors convincingly shows that individual change, as well as the phenomenal cultural shifts of the 1960s—a tumultuous time not unlike our own. They build to a powerful and touching crescendo all the while providing exactly the artful entertainment we’ve been longing for—more than we knew.

Tweet
Published in Theatre
More in this category: « Review: Face Off Theatre's Return Was a Revelation Review: Barn Theatre’s ‘9 to 5’ Is A Cathartic, Joyful Musical »
Login to post comments
back to top