Review: Barn Theatre’s ‘9 to 5’ Is A Cathartic, Joyful Musical 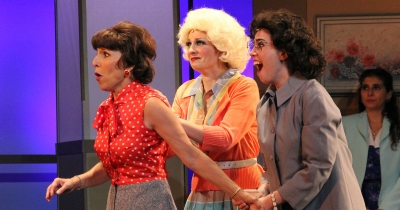 Dolly Parton's 9 to 5: The Musical at Barn Theatre. Courtesy Photo

Is there a place in the post #metoo cultural moment for a workplace comedy in which the narrative builds around a “sexist, egotistical, lying, hypocritical bigot” of a boss who runs roughshod over his female employees, inspiring both imagined and real revenge fantasies that involve poisoning, shooting, and stringing him up?

Why yes, yes there very much is. And that place is The Barn Theatre.

“9 to 5 The Musical”, with music and lyrics by Dolly Parton and book by Patricia Resnick — based on the delightful 1980 film starring Lily Tomlin, Jane Fonda, and Parton herself — is the perfect vehicle for The Barn’s post-pandemic return and as the opening show of their celebratory 75th anniversary season.

The musical tightens and simplifies the film’s hilarious plot while also adding some unnecessary romance that makes way for some terrific songs.

Under Patrick Hunter’s smart, creative direction, this show is big, bawdy, brazenly funny and shot through with a bluesy, rockabilly sound that comes to life beautifully with the phenomenal six-piece live band led by Musical Director Chris Gray and with the tremendous voices we’ve come to know and love at The Barn, enhanced by some incredibly talented newcomers.

The performances here are universally excellent. Perennial Barn favorites Penelope Alex as the infinitely competent yet always overlooked for promotion ringleader Violet Newstead and Melissa Cotton Hunter as equally competent yet (wrongly assumed) too busty and beautiful to be smart Doralee Rhodes prove themselves yet again as tremendously gifted comediennes and character actresses who sing magnificently together in songs such as “I Just Might.”

Their professionalism, along with that of beloved guest artist Robert Newman and his despicable Hart—complete with plenty of graceful slapstick—as well as Eric Morris’s understated naturalism as Joe, lifts up newcomers Kayla Gerogosian as the anxious divorcee entering the workforce for the very first time as well as Eliza Knode as office gossip Roz Keith who’s obsessed with the boss. Despite being a little bit young for their roles, they nail their characters’ respective quirks and achieve some of the most successful vocal moments in the show.

Technically this show is a mixed bag, with huge moveable set pieces by Steven Lee Burright beautiful dressed on one side to create Hart’s office, and completely undressed and bland on the other side to create the office cubicles, xerox room, men’s room, and even a hospital. With pylons colorfully lit from within by Michael McShane to complement the rest of the often candy-colored lighting design, the scene transitions are many and slow down the already long show. But the many carefully delineated spaces are impressive.

And as for the storytelling itself, the greatest redemption here isn’t just that Hart gets his comeuppance and women who have to fight to exist in any meaningful way get their revenge; it’s that instead of being passive victims, the abused underdogs take the bull by the horns, bypass the boys’ club altogether, and make their dreams come true, all the while improving everyone’s lives and conditions around them. It’s a feminist fantasy of the highest order and yet utterly apolitical. Quite a feat to pull off, especially so brightly and with such good humor.

This is yet another reason why this is the perfect time and place for this particular show.

Not to mention we all need the joyous spontaneous laughter and feel-good glow that comes from a night of wonderful entertainment at The Barn. Their audiences have no doubt missed their special brand of summertime fun at least as much as they have. And their “9 to 5” as well as the camaraderie and festivities of the bar cabaret show that follows the main stage performance every night are gifts that were well worth waiting for.

Tweet
Published in Theatre
More in this category: « Review: 'Shout! The MOD Musical' Is a Triumphant Return of Live Theater
Login to post comments
back to top