Review: ‘Cabaret’ Brings Out the Best Circle Theatre Has to Offer 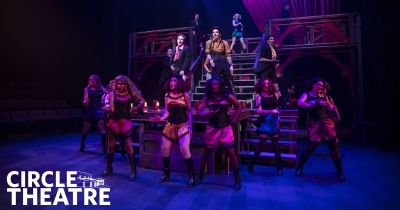 In “Signs and Symbols,” Vladimir Nabokov wrote of Aunt Rosa, “a fussy, angular, wild-eyed old lady, who had lived in a tremulous world of bad news, bankruptcies, train accidents, cancerous growths — until the Germans put her to death, together with all the people she had worried about.”

Had Nabokov’s fictional old lady met any of the characters from Cabaret, she would have worried about them, too, and not without reason; those residents of 1931 lived life not on “the edge” but on several: the edges of poverty, illegality, and the growing threat of Nazidom.

Cabaret debuted in 1966, thirty-five years after the events it depicts; it’s been 55 years since audiences first heard “Mein Herr” and “Two Ladies.” Is it all still relevant? Circle Theatre asks and answers the question in its current production.

The show begins, fittingly, with “Wilkommen,” a song of welcome. As scantily clad dancers strut and vamp, the master of ceremonies promises a fun, if perhaps morally dubious, evening.

Brooke Bruce, in a perfect act of gender-reversed casting, plays the emcee. She’s remarkable. Bruce brings charisma, strength, and corruption to the role, commanding the stage without (seemingly) working hard. Watching her, you’re half-tempted to buy a plane ticket to Germany.

So Bruce is a star, but a star in a bright firmament; Mary Rademacher Reed is charming and heartbreaking as the landlady, bringing pathos to a role that could easily lack contours, and Kobe Brown, handsome and mostly unflappable, is well-suited to his part as Cliff Bradshaw, the American who searches for and finds a fitting subject to write about.

But Cabaret lives and dies on Sally Bowles. Jaelyn Raiford embodies the character. Think of the range that requires: she has to play the sexy tease of “Don’t Tell Mama”; then the desperate charmer, hiding deep vulnerabilities behind a veneer of cynicism; the tentative optimist in “Maybe This Time”; and the woman who finally allows her mask to drop when confronted with Bradshaw’s decision to leave. Raiford never missteps. Talent flies off her like sparks.

Darkness accrues as the musical proceeds. The first sight of a swastika (which appears after a character we’d liked removes his coat) is genuinely shocking. Later, they show up on the glittering armbands of our Kit Kat Klub girls, who smile and kick their legs with healthy vitality; the effect is bleakly comical as well as stomach-turning. Finally, the symbol is cast huge and ominous on a backdrop, symbolizing that the Nazis have fully cemented their power. “Tomorrow Belongs To Me,” the song that closes the first act, ends rousingly, the threat of its title made clear by the fanatical salutes it triggers.

The lives of the characters, which sometimes seemed held together by spirit and glue, fall apart. Fraulein Schneider, the landlady, breaks off her engagement to sweet Herr Schultz, unwilling to risk the dangers marrying a Jew would bring, both to herself and to him. Bradshaw punches a Nazi, which won’t break your heart, and slaps Bowles, which might.

In the end, the orchestra itself falls apart: the swinging cabaret music devolves into noise as the emcee wishes the audience a final good night. That done, she removes her outfit to reveal what’s below: a concentration camp uniform, complete with pink triangle. Mileage will vary, but I found that moment less moving than I should have, maybe because the production had been so strong at evoking growing dread that this final moment felt like overkill.

Nevertheless, the overall production was more than successful. I’ve never seen a bad show at Circle Theatre, but I’ve rarely seen one as consistently excellent. And as the news too often makes clear, the play remains much too relevant. Life isn’t a cabaret, it turns out. Sometimes, it’s in deadly earnest.

Tweet
Published in Theatre
More in this category: « Review: Barn Theatre’s ‘9 to 5’ Is A Cathartic, Joyful Musical The Vagrancy to Debut Blossoming 2021 Series »
Login to post comments
back to top