The Vagrancy to Debut Blossoming 2021 Series 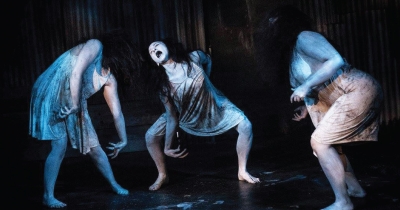 The trailer for The Vagrancy’s 2016 production of Macbeth presents three figures — lovely but feral, they are more than women; they are witches, restored through expert lighting, fine sound design, and powerful choreography to their rightful place, which is in our nightmares.

Macbeth’s status as a classic can make us forget the fact that it is as much horror story as tragedy. But, as one audience member discovered, The Vagrancy hadn’t forgotten; so powerful was the show that she ended up fleeing for the lobby.

Fittingly, the Vagrancy’s mission statement states that the theater seeks to create visceral work. But it has deeper ambitions, too; it wants to stage works rich with duende, the Spanish term meaning heightened emotion, authenticity, and soul: the element that separates a serviceable show from one that lodges itself under your skin.

The Vagrancy began in 2007, in New York City; when artistic director Caitlin Hart moved to Los Angeles, it followed. Over the next decade-plus, The Vagrancy staged a number of shows, some classic, some contemporary, earning positive reviews from critics and audiences alike, and carving out its niche.

“Then I had twins,” Hart said. “I thought I’d be super cool and live in a one-bedroom apartment with two cats and two babies. But after six months, I realized I wanted to move back to Michigan, to be closer to family.” Nearly two years ago, she did.

Grand Rapids is now home to The Vagrancy. The theater is soon to launch Blossoming 2021, a series of four full-length plays written by a diverse group of Michigan residents. To qualify, writers had to submit pitches, survive a culling, and, once selected, produce 10 pages every two weeks until the plays were complete, incorporating feedback along the way.

Anita Gonzalez, author of Sunset Dreams, found the process invigorating. “Having to produce at that level is wonderful,” she said. “And it’s also interesting to work with a collective of playwrights and engage with others’ ideas about writing.”

Pat Jones, the director of Sunset Dreams, enjoyed the process as well. “We would get chunks at a time, and ask ourselves, ‘Where’s this going? Where’s she going to take this?’” She admired Gonzalez’ willingness to make changes after the first draft was complete. “I love that she made a big change with the main character, bringing in more depth and background. She did some amazing rewrites.”

The story follows several people, mostly African-American women, on a trip to the Caribbean. They snorkel; they look at mountains. But rifts occur, or are revealed. Like many families, they have to deal with the frailties of an aging relative. Themes of memory, ancestry, and the joys and sorrows of family life make up the play’s soul.

Jones points out that it’s refreshing to see African-American women not dealing with the typical issues you might see in most media. These are successful, educated women, working through women’s issues. (Spoiler alert: The play passes the Bechdel test).

As with the other plays in the series, Sunset Dreams will be presented virtually (although with rehearsed, strong actors, and recorded well). “It’s better than being in a black box theater with binders,” Jones said. “I can play with zoom lenses, get close, have fun. But the curse is not being there with people. Theater’s all about people. But it’ll be good. I’ve worked in TV for a long time, so I’m very visual. And I’m having all the actors wear swimsuits,” she said, laughing.

Susan Sontag wrote that “real art has the capacity to make us nervous.” To make us feel, in other words. The Vagrancy has an opportunity to do so here. Given its track record, and the talent it’s already gathered to itself, local lovers of theater have real cause to celebrate.

More information can be found at thevagrancymi.com.

Tweet
Published in Theatre
More in this category: « Review: ‘Cabaret’ Brings Out the Best Circle Theatre Has to Offer Don't Stop Dancing: Atelier Dance Company »
Login to post comments
back to top