Review: SpongeBob the Musical is an Ocean of Joy and Talent 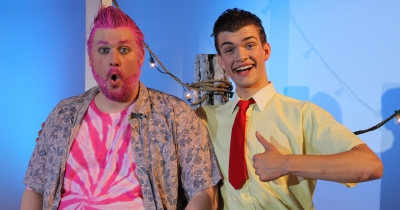 “SpongeBob,” Barn Theatre producer Brendan Ragotzy chanted from his curtain speech at the start of every show this season to the refrain at his behest from the audience, “is for everyone!”

As it turns out, he was right! What may at first inference be a children’s theatre production based on the wildly successful and wonderfully weird Nickelodeon cartoon “SpongeBob SquarePants,” the musical is for children and adults alike, though also for fans of the cartoon, as well as those who have never seen it. And as a live show, it’s equally wildly successful and wonderfully weird, but made more so by the extraordinary talents and creative genius shot through the 75th anniversary season Barn Theatre company.

Directed with aplomb by Eric Morris, the cartoon underwater world of Bikini Bottom springs to life through marvelous collaboration between the technical artists under technical direction from Sam Rudy, the expertly cast phenomenal performers, as well as the fantastic orchestra under musical direction from Chris Gray.

The apocalyptic story, with book by Kyle Jarrow, is eerily relevant as the eternally optimistic SpongeBob, his pal Patrick the Starfish, and the high-strung scientist squirrel Sandy Cheeks take on the (often hilarious) difficulties of heroically uniting their motley community to beat the clock against the impending doom of underwater volcano Mount Humongous’s eruption that will surely kill them all. Facing obstacle from the likes of an overblown media, an untrustworthy government, schools of fish who mindlessly seek a guru to follow, and money-grubbing business owners out for themselves, their challenges are very real, and yet science and optimism are the unrelenting antidote to the villainy they face.

The Barn production, without the huge budget that characterized the spectacle of 2017’s Broadway show, avoids overly politicizing the story’s subtext and instead delivers sheer delight with creative brilliance from start to finish, offering the utmost in entertainment while also achieving the highest of collaborative performing arts.

That begins with fabulous character building. Every wacky cartoonish creature on stage comes alive with realness, depth, color and tremendous humor. Aaron Czarnecki is an energetic, sweet, wide-eyed SpongeBob; Patrick Hunter plays a phenomenal Patrick, embodying his doltishness with such hilarity, at times his facial expression alone can bring down the house. Individually they are remarkable singers, and their duet “(I Guess I) Miss You” is both gorgeous and moving.

Every performer here is an athlete, scaling Stephen Lee Burright’s cleverly moveable set pieces and they beautifully bring to life Melissa Cotton Hunter’s spectacular choreography that runs the gamut from hip hop to line dancing to tap and slow-motion acrobatics. Nicholas Biddle’s grumpy octopus Squidward Tentacles, with extra legs thanks to Costume Designer Melanie Wehrmacher’s terrific talent, is wonderful in tap number “I’m Not A Loser.” Also tremendously fun and athletic is Sydney Weiser as Sandy Cheeks, the Texan scientist squirrel, whose indefatigability shows in her spontaneous karate chops and round house kicks.

Charlie King’s Mr. Eugene Krabs, with his gruff old fisherman’s voice and marvelously fluid crab walk, and John Jay Espino as the spectacularly villainous Sheldon Plankton (who does a rap!) along with his robot wife Karen played by Zoe Constantindes, are among other outstanding performances.

Even the stage manager and assistant stage manager get to make a rare onstage appearance in a silly second act opener cameo from Robert Newman as a decked-out pirate, made all the funnier for the fact the Newman played Captain Hook in The Barn’s production of “Peter Pan” in 2013.

Everyone on stage seems to be having a blast, which only invites total investment from the audience. To look around at the astounded, cheerful faces aglow in the house seats is to know what a tremendous success this show is.

For it’s not just the performances that are excellent, but the way their characters are engaged with and created by the playful, colorful, creative set design by Steven Lee Burright in conjunction with Michael McShane’s equally colorful and nuanced lights, as well as Melanie Wehrmacher’s boldly creative costumes complemented by Garrylee McCormick’s tremendous wigs. And sound design by Spencer Wooley with on-stage "sound effects guy" Luke Ragotzy infinitely adds to the cartoonish delight.

And though the score doesn’t hang together as it might if it were written by a single artist, it’s in keeping with the spirit and themes of the show that the original pop songs were written by such legendary artists as John Legend, Cyndi Lauper, David Bowie, and Steven Tyler, among other contemporary bands including They Might Be Giants, The Flaming Lips, and Panic! At The Disco. Each unique song soars under Chris Gray’s direction and his fantastic six-piece orchestra.

Every one of the countless moving parts of this show works magnificently with all the others to bring together a show that is, in fact, for everyone. It’s perfect summer fun that makes you grateful all over again for the opportunity to be in the presence of live theater not just for the entertainment, but because it makes you feel so alive to engage with such talented artists doing what they do with such excellence.

Tweet
Published in Theatre
More in this category: « Don't Stop Dancing: Atelier Dance Company Review: 'Just Too Big' Is a Monumental Love Letter to Musical Theater »
Login to post comments
back to top