Review: 'Just Too Big' Is a Monumental Love Letter to Musical Theater 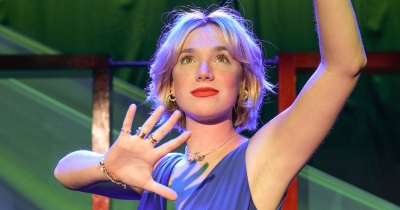 "Just Too Big" at Saugatuck Center for the Arts. courtesy Photo

The concept behind “Just Too Big!” the magnificent new show at Saugatuck Center for the Arts is simple enough: it’s a collection of musical numbers from Broadway shows that are too big to produce on the Mason Street Warehouse stage. In essence, it’s a living love letter both to Broadway and to the Saugatuck audiences who love — and have missed — live musical theater.

But it’s the extraordinary skillful execution under Artistic Director Kurt Stamm’s brilliant direction that turns this brand new show built from the ground up from a clever, simple concept into something passionately divine.

In 90 minutes, five exquisitely cast performers offer delightfully interpreted songs from Broadway past and recent, with little snippets of narration that invite the audience into the larger story of each song and show as well as perspectives on the life of an actor. The effect is brilliant, personally endearing and connected to the larger human themes that inspire very real emotion, particularly in the context of this cultural moment.

As the audience gratefully sits in the comfort of the beloved theater, we are masked, for the protection of one another as the pandemic we thought might be over continues to twist and turn. We are reminded even as we are thoroughly enthralled by what’s on stage, that it is an extreme privilege to be there, and the fact that the performers in front of us are making their post-pandemic debut after a terrifying stretch of unemployment isn’t far from anyone’s minds.

In the midst of that awareness, they sing and act with tremendous beauty and grace some of the greatest songs written in the last century, songs that remind us of the highs and lows and hilarities and grief of being alive. It’s the most magnificent of roller coasters that hangs together with an exceptionally stylish aesthetic.

They all perform with tremendous heart, maximizing their unique gifts, and complementing each other marvelously to create poignant moments with carefully chosen songs and evocative choreography. It’s amazing what these five create together, as virtuosos, in duets, as well as in larger, swelling numbers.

Gina Milo’s trademark comedic timing and tremendous vocal playfulness really shine in numbers from “Spamalot” and “Tootsie”; Nina Negron brings new depth to “She Used to Be Mine” from “Waitress” that left more than a few of us misty as well as terrific heart to songs from “Thoroughly Modern Millie” and “Get On Your Feet.” Juliette Redden is a powerhouse with songs from “Wicked” and “Come From Away.”

The men more than hold their own among these magnificent women. Newcomer to the Saugatuck stage, David Socolar makes the most of his stunning tenor and delightful acting skills in numbers from “Dear Evan Hansen” and “Book of Mormon”; and Lamont Walker, II is particularly stellar in songs from “Ragtime” and the romantic duet “If I Loved You” from “Carousel” with Socolar that’s especially moving.

Each of them is incredible in their virtuoso performances, and then there are the medleys interspersed throughout the show: in homage to classic Broadway with numbers from the likes of “Crazy for You,” “Oklahoma,” “Anything Goes,” “Kiss Me Kate,” and “The King and I” among others; a fabulous medley of Stephen Sondheim songs from shows including “Gypsy,” “West Side Story,” “Follies,” and “Into the Woods”; and a montage of highlights from beloved Disney musicals such as “Beauty and the Beast,” “Lion King,” “Frozen,” and “Little Mermaid.”

It’s an astounding achievement to be sure, with particular kudos to Musical Director Tom Vendafreddo, whose arrangements are stunning, and Associate Musical Director Brent Decker. Their band of four creates an enormously beautiful sound (with perfectly balanced sound design from Cameron M. Griffiths) rivaling that of orchestra pits six times their size.

And miraculously, even with elegantly minimal sets, props, lights, and costume changes, they effectively create shifts and changes in characters and shows as well as lovely tableaus and powerful stage pictures, all the while keeping the focus on the gorgeous songs and talented performers.

Jeremy Barnett’s set creates a series of rectangular red frames to dramatically encase each actor upstage and provide a larger frame with red rectangles in increasing size stage right and left wherein projections of Broadway show posters and graphics appear to signify the shows from which each number originates. A huge white curtain is draped diagonally in front of a dark curtain upstage to provide a canvas for Jen Kules’ elegant lighting design. And Darlene Veenstra’s sophisticated costumes are both beautiful and functional as they are often reminiscent of character costumes (a red pantsuit for “Tootsie” and a blue one for “Frozen” as well as black slacks and tie with a white button-down for “Book of Mormon”) and yet remain unfussy as well as versatile.

Every detail is attended to and it shows in the extraordinary quality and effect of this show that is both of Broadway and of our lived lives. In light of COVID-19, #metoo, and Black Lives Matter, not to mention the ravages of climate change and other politicized realities, as the song from Ragtime proclaims, “we can never go back to before.”

However, “Just Too Big,” gives us a glorious glimpse into what has come before so that we can remember who we were, who we really are, and whom we want to be. This is the power of live theater which, as the performers rightfully declare, cannot be replicated.

Just as this uniquely original show that hits all the right notes will likely never be replicated. Created for this moment with enormous heart, the purest of intentions, the most magnificent creative team, and tremendously powerful performances, it is a gift not to be missed.

Just Too Big
Saugatuck Center for the Arts
Aug. 11-22
sc4a.org

Tweet
Published in Theatre
More in this category: « Review: SpongeBob the Musical is an Ocean of Joy and Talent Review: 'The Wedding Singer' is a Showcase of Top Talent »
Login to post comments
back to top