Review: 'The Wedding Singer' is a Showcase of Top Talent 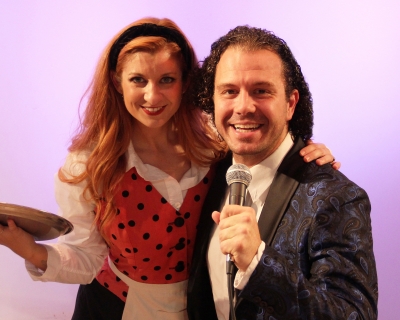 Ahhhh, the 1980s. Who among us who lived through them could ever imagine the fond nostalgia we as a culture would one day have for big hair, vapid pop and rock music, the combination of lace and denim, and the pretense that everything is just peachy?

But here we are, all of us longing for more light-hearted days, and “The Wedding Singer” at The Barn puts us there in practically every way.

Based on the 1998 romantic comedy written by Tim Herlihy, starring Adam Sandler in the titular role, the plot very closely follows that of the film. An aspiring rock star comes to believe he’s a total loser after being left at the altar by a two-bit hussy, and he falls for a waitress who works the same venue where he’s the wedding singer but is engaged to a flashy Wall Street coke-and-hooker-loving actual loser. Their journey takes them from work to friendship to Vegas, peppered with some pretty hilarious musical numbers, particularly from peripheral characters, all of which is woven together as a heart-warming love story.

So, it’s your basic flimsy Rom-Com adaptation for the stage, but made entirely delightful by the phenomenal talent at The Barn.

With excellent direction from Brendan Ragotzy and musical direction from Chris Gray, the colorful sights, sounds, and attitudes of the Reagan era come to life in a most entertaining way.

This is no jukebox musical, though the songs by Matthew Sklar with lyrics by Chad Beguelin are deliberately reminiscent of recognizable ‘80s songs with riffs that sound straight from Pat Benatar among others, with fun choreography from Melissa Cotton Hunter that evokes “Thriller” “Flashdance” and “Material Girl” with a smattering of iconic ‘80s moves like The Sprinkler and The Worm.

The cast beautifully brings all of this to life, though the characters as written aren’t nearly as quirky as they could be, so it’s each performer who must make them interesting if not lovable. Eric Morris’s Robbie Hart, aka the wedding singer, gives a terrifically athletic, slapstick performance, and is strongest in his most angsty, frustrated moments such as in the number “Somebody Kill Me.” He sounds especially wonderful in duets with Melissa Cotton Hunter, including the lovely “If I Told You,” whose Julia is vibrant, emotionally authentic, and gives us the biggest, most rock and roll voice on stage.

But it’s the peripheral characters who seem most alive and get to have the most fun, making this show a truly wonderful ensemble piece. Nathan Hoty is a stitch as gender fluid George; Zoe Constantinides is boldly delightful as sexy Holly; Jason Kimmel is phenomenal as slick and smarmy Glen Guglia; Lexi Pinnata’s skanky Linda and her over-the-top strip tease and Roz McHenry’s sweet and sexually-charged Grandma Rosie offer major highlights of the show.

And yet of all these fantastically fun moments and performances, “Single,” the scorned-dudes anthem that takes place in a dive bar, is worth the cost of admission alone. John Jay Espino’s mildly offensive bartender is one of half a dozen different fabulous characters he creates; Charlie King’s deadpan one liners are a scream; and Patrick Hunter’s Sammy, with his Flock of Seagulls hair, meticulous New Jersey accent, and creative physical comedy brings the most delightful, inspired character of all.

Aside from the period itself, of course, which largely is established by the technical team. The set, designed by Steven Lee Burright and Sam Rudy, is functional, black with primary colors that look as if they might pop neon in a roller rink lit by black light; and hysterical set pieces including a dumpster, a dance cage, and a vibrating bed provide wonderful sight gags as well as metaphors central to the quickly moving narrative. Michael McShane’s lighting design, full of layered, rotating patterns and bold colors, complements the overall design concept. And Melanie Wehrmacher’s marvelous costumes, part shiny wedding gowns and tuxes, part acid wash, concert t-shirts, bustiers and off-the shoulder ripped leather and lace, are perfectly evocative of the time and place’s style.

It’s not the ‘80s, though, or even our nostalgia for what it may represent on the surface, that make this show worthwhile. It’s what the marvelous cast and crew do with the material that makes us glad we RSVPd to the sexy and silly comedy hosted by Robbie Hart who turns out to be anything but a loser.

Tweet
Published in Theatre
More in this category: « Review: 'Just Too Big' Is a Monumental Love Letter to Musical Theater Bold As A Mouse »
Login to post comments
back to top