Bold As A Mouse 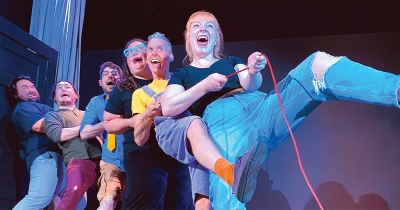 Picture yourself in a subway. Nobody’s talking, but it’s a subway; of course no one is talking. The sound of the train could almost be someone’s breath. One rider flips through a magazine, laughing. Another has a wordless — although not silent — panic attack. Can you imagine it? Without speaking, a woman gives birth. A man in the corner pleasures himself. Ideally, you’d get to where you were going before he, uh, gets to where he’s going, but, well…

The above was a sketch put on by Dormouse Theatre. Artistic Director Stephen Dupuie described the challenge: Depict the ups and downs of a subway ride without using anything but bodies and breath. It fits squarely within Dormouse’s remit — different, funny, and maybe a little shocking.

Dormouse Theatre is a concept that’s changed many times over the years. Dupuie came up with the idea in college, naming it after the Alice In Wonderland character. “People liked the name, asked about it,” he said. “Really, the name is the only thing that stuck.”

After college, Dupuie worked a corporate gig. He did well, making money for himself and the company, but his heart wasn’t in it. Every day felt exactly the same as the last. “I needed to feel challenged,” he said. “I wanted to branch out and do something that didn’t feel like work every day.”

Five years ago, he saw his opportunity with an old church building in need of a buyer. He purchased it and began renovations, which took about four years. The goal was to build a space that could house the kind of events he was passionate about.

In the meantime, he knew he had to get Dormouse’s name out there. He held auditions for a comedy troupe. At one audition, only one person showed up. But that person told a friend. Word spread, and like-minded people began to get involved.

In auditions, he would throw curveballs, deliberately setting challenges that could not be met, to see how comfortable people could be when uncomfortable. Sketch comedy requires that.

Those accepted into the group began to work on sketches. Kids In The Hall was a notable influence — smart sketch comedy, sometimes traditional, but sometimes left-field.

Sometimes, there were live musical interludes between the sketches. At other times, there was music in the sketches; in one, a woman sings, “Five hundred twenty-five thousand six hundred minutes,” the opening line to “Seasons of Love,” from Rent. And she sings it again. And again. Other people come onto the stage, singing and dancing, and what first was strange becomes absurd and funny.

Shows had themes. One show focused on existential concepts, such as time itself being an illusion. In what might have at first seemed an accident, lines and actions were repeated. “It’s existential dread,” Dupuie said, “but in a fun way.”

He knew instinctively that, while traditional shows like Oklahoma had their place, so did sketches in which one character poured out salt while another ground pepper, sometimes aggressively and always interestingly.

And he worked on the building. In time, it was ready to open. COVID-19 delayed that, but not forever. Today, the theater is a space not only for his troupe, but for other organizations as well. “That was always a goal of mine,” he said. “We’ve cultivated relationships with other theatrical companies that didn’t have a home, and whose best fit would be Dormouse Theatre.”

The doors are now open, welcoming anyone who wants to laugh, think, and spend some comfortable time being uncomfortable.

For more info, check out dormousetheatre.com.

Tweet
Published in Theatre
More in this category: « Review: 'The Wedding Singer' is a Showcase of Top Talent Review: 'Ben Hur (A Comedy)' is a Hilarious Delight »
Login to post comments
back to top