Review: 'Ben Hur (A Comedy)' is a Hilarious Delight 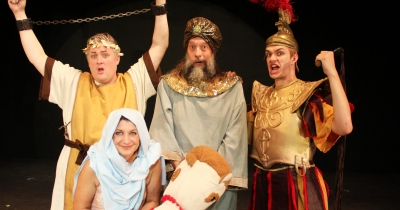 What could possibly be funny about a stage adaptation of the 900-page 19th Century Biblical epic novel best known as one of the hours-long mid century Charlton Heston films?

Everything, as it turns out.

“Ben Hur: An Epic Comedy” by Patrick Barlow directed by Brendan Ragotzy at The Barn Theatre is a scream. Written by the author of “The 39 Steps” in a similar style of parody that leaves four actors playing a plethora of characters with lightning-quick changes and seemingly infinite plot points on the turn of a dime, “Ben Hur” feels like silliness equal parts borrowed from Monty Python and “Waiting For Guffman.”

The story goes like this: a British amateur theater collective of four actors and a very limited budget is quite serious about bringing to life the historical fictional revenge tale of Judah Ben Hur, a Jewish prince from Jerusalem who in the first century is wrongfully accused of murder, enslaved by the Romans, and ultimately is redeemed by becoming a compassionate Christian—all of which is happening in tandem with the unfolding life of Christ.

And here’s where the funny comes in. It’s four players each playing a multitude of roles, sometimes simultaneously. But they’re actual brilliant, professional actors doing all the roles playing amateur players playing those many characters—crossing boundaries of gender, ethnicity, class, and good taste, among other lines that likely shouldn’t be crossed.

Because it’s the translation of the material more than the material itself that is so uniquely delightful under Ragotzy’s impeccable direction at The Barn. The malleable cheap-looking set and props by Steven Lee Burright, including camels on which the three wise men ride, a ship of slaves, a chariot race, and more, is deliberately cheap looking for the silliness of the play within the play. Troy Benton’s hilarious sound design makes more happen than otherwise possibly could, and Michael McShane’s lighting design does much of the heavy lifting in bringing about scene changes. Melanie Wehrmacher’s costumes, too, transform singular actors into multiple characters and back (sometimes within seconds) with a mere change of a headpiece or scarf or other bit of fabric.

But most of all it’s the actors who so effortlessly convince us that they’re terribly and ridiculously inept actors through their tremendous comedic skill. Just four of them. Putting on this epic tale we didn’t even know we wanted to see.

There’s Patrick Hunter as the self-important Daniel, who’s named the theater troupe after himself and wants most of all for his mum to come to the show, as well as a terrifically athletic performance as the wonderfully natural Judah Ben Hur. His timing is impeccable, the relationships he builds onstage feel authentic, his character arc real, and his command of the most enjoyable audience participation bit I’ve ever seen is quite impressive.

Aaron Czarnecki is excellent as both villain and messiah, equally earnest as Omar, Messala and Jesus himself, but completely transforms his look and energy to fit each role.

Melissa Cotton Hunter pulls out all the stops in equal parts as virgin, self-righteous slave, sexy Spanish belly dancing whore, and pathetic weirdo. She expresses as much with her eyes as she does with her body and voice (which traverses the globe as well as many octaves) and literally runs circles around everyone on stage as she shifts from character to character.

And Charlie King is simply phenomenal as the Jewish mother Sara as well as the hillbilly narrator and the admiral of the Roman fleet—not to mention a fay Pontius Pilate. He brings so much creative hilarity to each character and each moment the audience is wrapt.

They never play for overblown moments or become caricatures; together they’re a fabulous meta-ensemble, utterly convincing in their plethora of roles, inspiring genuine laughter in the most surprising places and delightful ways.

You may not realize you want to see a live stage adaptation of Ben Hur, but trust me: you do. Not so much for the story you may think you know or don’t know at all, but to forget your cares for the moment and immerse yourself in what The Barn creates with this ridiculously clever, fun show.

Tweet
Published in Theatre
More in this category: « Bold As A Mouse Review: 'A Slippery Slope' Hilariously Brings Farce Into the Modern Age »
Login to post comments
back to top