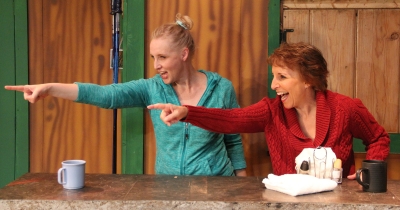 The new American sex farce, “A Slippery Slope” now in production at The Barn Theatre could be a very slippery slope, indeed. One can’t help but wonder if this historically sexist genre must be left behind at this point in time.

But what one discovers upon seeing the premiere of this delightful new show, a sequel to last season’s “In Hot Water,” is that there is nothing at all to worry about. For what’s old and sexist is new and a little bit progressive and even woman-centered in this comedy that’s light as freshly-fallen snow. All while retaining that which we love about farce: it’s quick, absurd, hilarious, and offers surprising physical comedy.

Written by and also starring Barn Managing Director Patrick Hunter, and directed by Brendan Ragotzy, the silly situation reveals itself when an extended family lands at Michigan ski lodge Morning Wood Ridge, the name of which provides endless jokes and double entendres, just one example of cleverness with language that shows up throughout the play.

Ridiculousness ensues when a migrating positive pregnancy test surprises the three siblings, their spouses, a babysitter, the lodge owner, and a ski instructor, who largely misinterpret what they see, hear, and do, often because they’ve been set up by one or more of the others who also are working from incorrect assumptions and misinformation.

All of it works so very well largely because of the strong performances. Every character is deeply flawed, and yet each is distinctly likable because of how the actors portray them and create believable relationships amid ridiculous circumstances.

And the women, ultimately, run the show. Melanie Wehrmacher is a wonderfully stern Shirley, family protectress and ball-busting wife to Kenny, played remarkably by Charlie King, whose drunkenness, like every potential overplayed cliché in the show, has genuine motivation, fueled ultimately by kindness and care, and comes off as very real and very funny.

The relationship between Peter and Melanie also comes off as very real and very funny—even when they must confront their suspicions about each other. Played by real-life husband and wife Patrick and Melissa Cotton Hunter, their ease and naturalness together is palpable.

The relationship Cotton Hunter builds with Lexi Pinnata as babysitter Becca is also terrifically natural and easy, and there’s genuine warmth between Penelope Alex as Pamela and Steven Lee Burright as her husband Harry.

And yet some of the funniest moments and lines emerge from outside the family system with Joe Pehrson as hillbilly lodge owner Norm and Luke Ragotzy as the ambiguously foreign, sexy ski instructor Jan.

It’s a wonderful ensemble cast that works beautifully together. Their timing is everything, and the physical comedy, though not terribly over-the-top as it can be in some farces, is excellent.

All of the action takes place in the terrific space designed by Steven Lee Burright to very much resemble a knobby pine paneled Michigan ski lodge with four doors through which the actors “ski in, ski out,” with lighting design by Michael McShane. Melanie Wehrmacher’s costumes, Sydney Weiser’s props, and original music by Troy Benton further set the mood, and create time and place.

“A Slippery Slope” mercifully apolitically skis along the edge of political correctness with an absurd family comedy that’s utterly ridiculous, comfortably real, and conscious of its time. It restores its own genre, the American sex farce, and saves it from misogyny with genuinely loving relationships between people who actually desire each other — and by placing women in the all-knowing driver’s seat.

Here the men are the ones who are confused, and it turns out to be a very enjoyable experience — something, in fact, very much worth laughing about.

Tweet
Published in Theatre
More in this category: « Review: 'Ben Hur (A Comedy)' is a Hilarious Delight Everybody Dance »
Login to post comments
back to top