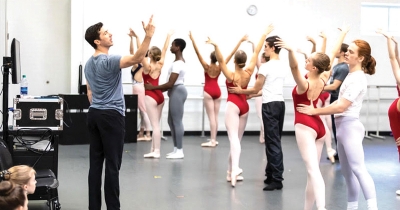 Jon Upleger had grown tired of the long-distance thing.

A classically trained dancer, he joined the Nashville Ballet at 18, where he would spend the next twenty years of his life. There, he met Alexandra Meister, another dancer; they found themselves flirting with each other during The Nutracker; after the show, they went on a date; in time, they married.

His wife, now Alexandra Meister-Upleger, moved north to join Grand Rapids Ballet. Jon finished his career in Nashville, then came here. “Grand Rapids is a fantastic city,” he said, and a city that had a need he could help meet: a need for high-quality, inclusive dance instruction. So he opened Grand Rapids School of Dance, located on the south side of town, near 28th Street.

The location was perfect: right in the heart of everything. The landlords were easy to work with. And the building offered a safe, well-sized space. Cameras have been set up, allowing parents to see kids without distracting them by being in the room. For parents more inclined to shopping, Woodland Mall is nearby.

In September, free classes were offered to dancers of all ages and abilities. He said it was great to get people into the space, some of whom had never taken a class before, and to see them take in the building, whose renovations were so recent that the place still smelled of new paint.

Sometimes, promoting ballet can feel like an uphill battle. “It got to a point where it can feel a little stuffy,” he said. “Elitist. But we really want our school and our training to be for everybody. Ballet can do so much for students.”

He knows this firsthand. A shy, reserved child, he found in ballet a chance to express himself, and even to excel. Ballet combined technical skill and athleticism with artistry, and forced him to learn excellent time management, and the importance of pursuing passions even when it’s difficult.

A summer program at Blue Lake Fine Arts Camp opened his eyes. “That was the first time I understood what ballet could be. This was something different.” His passion carried him to Nashville, where he danced the roles that, as a ballerino, you want to dance: the prince in Swan Lake; Romeo in Romeo and Juliet. Directors helped shape the vision, but he had the opportunity to take ownership of the role, and he took it.

Not everyone who studies at Grand Rapids School of Ballet will become a professional dancer; he has no illusions about that. But they will still learn valuable lessons. “I know so many dancers who retired,” he said. “Employers love them. They throw themselves into what they do. That level of commitment they learn in ballet really carries over.”

Over the years, ballet has changed. Standard classical ballet is still the standard, yes. “We need to do those works justice,” he said. But room has opened for different directions. “It doesn’t have to be one thing anymore.”

A natural question: what sets Grand Rapids School of Dance apart from other schools, including Grand Rapids Ballet School? Upleger doesn’t see it as a competition; he admires the work James Sofranko, artistic director of Grand Rapids Ballet, has done; and he sees his school as pursuing many of the same goals.

Ballet brings several benefits; after all, it brought him a wife, and a son. Upleger can’t promise that any love connections will take place at his school, but he can promise — and has promised — that ballet can bring a great deal besides. For those who would like to hold him to that, the doors are now open.

Tweet
Published in Theatre
More in this category: « Review: 'A Slippery Slope' Hilariously Brings Farce Into the Modern Age Review: 'Songs for a New World' Offers Hope When We Need It Most »
Login to post comments
back to top