Review: 'Songs for a New World' Offers Hope When We Need It Most 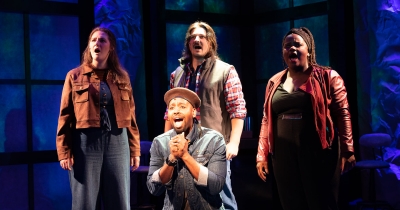 Songs for a New World. Photo by Becky Klose

Though first appearing Off-Broadway in 1995, Jason Robert Brown’s “Songs for a New World” feels aptly named now, especially in its beautiful form as the first show at Farmers Alley Theatre in 600-or-so days since the pandemic shut them down.

Indeed, it is a new world, and we need these songs and this show perhaps now more than ever.

Directed with aplomb and terrific intentionality by Jerry Dixon, “Songs for A New World” at Farmers Alley offers 19 numbers performed by four exceptional performers. It’s a song cycle cum abstract musical, in that each song is complete in itself, but they are linked thematically; the performers play a multitude of characters, and each song is like a monologue with a delightful score largely influenced by blues, rock, jazz, funk, and gospel (brought to life magnificently by Music Director Cole P. Abod and his terrific four-piece band), as well as the often quite touching lyrics, at the forefront of the storytelling.

“All of a sudden, life is different than you planned,” they sing in lovely harmonies in the opening number that sets the stage for a journey through little vignettes that explore moments in a diverse series of lives that changed everything.

From a woman who literally steps out onto a ledge to get her husband’s attention to lovers who regret giving each other up to an aspiring teen basketball star recounting his hard knocks to a mother whose husband and son are both soldiers, the song stories are poignant, often sweet, and sometimes quite funny.

Together they make up much more than the sum of their parts and give us a hopeful look to the future amid terrible uncertainty — something we’re all too familiar with in this cultural moment. So much so that when we’re told to “Hold tight. It’s dark right now, but soon there’ll be light,” we realize how badly we need to hear “Listen to my song and trust me: We’ll be fine.”

And somehow we believe it after 90 minutes of this lovely performance that skirts the edges of sentimentality to convince us, once again, to have hope.

This is thanks to excellent performances, direction, and technical choices.

Though there are terrific virtuoso performances, one right after another, this is a truly marvelous ensemble cast of four. Jos N. Banks, Cara Palombo, Nattalyee Randall, and Matthew Stoke are beautifully cast; their voices are gorgeous individually and together in remarkable harmonies; they each play distinct characters with minimal props and a simple set (Savannah F Draper and Justin Thomas); and they elicit a great range and depth of emotionality, including genuine humor and grief.

They move through the open space of Thomas's scenic design with elegant blocking, staging, and choreography from Dixon, all of which is highlighted and delineated by Lanford Potts’ evocative lighting design, including powerful projected images to offer transitions in space and place that also function as a tear-jerking highlight reel of news images from the past year and a half.

Not that we needed the reminder of what we’ve been through and continue to endure as we dutifully sat in the packed theater, masked, after having provided proof of vaccination in order to enter. But it all adds up to an experience only live theater can provide: one in which we see ourselves and each other with a little more compassion, a little more beauty, artfully reflected back at us from the stage, live and in person.

Upon their exquisite return, Farmers Alley does, indeed, offer its hungry audience wonderful songs for this strange and unpredictable new world, songs that offer hope, a glimmer of light in the darkness from which we seem to be emerging. At any moment, things could change dramatically, just as they do for the characters we fall in love with on stage; but, like them, we will, after all, be fine. This show convinces us of that in a most beautiful way.

Tweet
Published in Theatre
More in this category: « Everybody Dance Review: 'Off the Canvas' is a Triumphant Return to the Stage »
Login to post comments
back to top