Review: 'Off the Canvas' is a Triumphant Return to the Stage 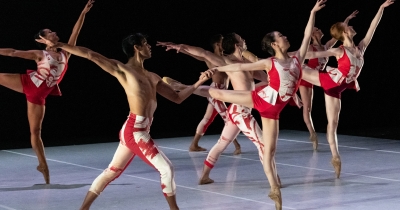 "Off the Canvas" at GR Ballet. Photo by Ray Nard Imagemaker

The idea of transforming visual art into an immersive experience is not new, and the tremendous success of the touring Van Gogh Immersive Experiences recently — in which Vincent Van Gogh’s paintings become moving pictures set to music and projected onto the floor and walls of rooms through which patrons step inside — is but one extraordinary example.

Grand Rapids Ballet’s “Off the Canvas”, their first live performance inside the Peter Martin Wege Theatre since the pandemic forced their first hiatus in 50 years 19 months ago, offers an equally immersive experience — one perhaps even more powerful and collaborative — of transforming visual art through movement and music to transcend the false boundaries of art itself.

The program offers three distinct 25-minute ballets, each created by a different choreographer who uniquely approaches the concept of making visual art come alive and gives the magnificent Grand Rapids Ballet dancers, who have never been stronger or more expressive, wonderful material based in classical technique that also pushes its perceived boundaries in phenomenal ways.

No doubt each dance is made anew with the talents of this terrific company under James Sofranko’s excellent artistic direction.

“Cold Virtues,” Adam Hougland’s stunningly sensual dance that originally premiered at Louisville Ballet in 2003, which Grand Rapids Ballet premiered in in 2019, has even more potent energy.

It is both haunting and hypnotic, a sepia photograph sprung to life, a sensual and sinister period piece set in a Depression-era speakeasy. Shot through with masculine energy, seven men and seven women, all lithe, nimble, fierce, and strong, with angular arms and in soft shoes, create an unforgettably cinematic and modern ballet, with pairs Alexandra Meister-Upleger and James Cunningham as well as Emily Reed and Steven Houser, all of them reprising their roles, at the center.

Set to Philip Glass’s terrifically dramatic “Glass Violin Concerto” with period-reminiscent costumes by Marion Williams and moody lighting by Michael T. Ford, the dancers make backwards entrances with outstretched arms; they roll on the floor, shimmy, sway, and embrace in pairs; they get dragged across the floor on a diagonal line with 180 degree turnout; they freeze in midair; they move in a circle as if in a folk dance with one dancer at the center; and they otherwise create stunning lifts, extraordinary angles and swirls to heart-racing effect under ceiling fans hung high that mirror their layered twirling, the repetition of which is also seen in powerful motifs that signify a sinister dominance — including wrists and fingers undulate at hips as if weaving a spell.

Grand Rapids Ballet resident choreographer Penny Saunders’ “In-Frame” brings to life the works of Alice Klock’s through Max Richter’s recomposition of Vivaldi’s “The Four Seasons” with the dancers as viewers of art who also, at turns, transform their bodies into the paint and patterns of the artwork as well as that which frames the art itself.

It premiered in 2017 here, and is still marvelous, with four couples signifying the four seasons and offering tremendous partnering work in which they seem to be swimming through each other’s physical shapes with gorgeous lifts and twirls, moving over and through a white square on the floor center stage onto which shifting images of paintings are projected. The marriage of John Ferraro’s scenic design with Sam Begich’s video design and Patricia Barker’s costumes is exquisite.

In Katarzyna Skarpetowska’s titular piece, “Off the Canvas”, also set to Vivaldi, 10 dancers, like splashes of color dancing across a canvas, perform on a completely white floor surrounded by black curtains: gliding, lifting, twirling, inverting in lifts with legs akimbo, sometimes all at once, in athletic pas de deux and pas de trois, create the feeling of measured chaos, full of wonderful tension and beautiful, like the creative process itself.

The program note suggests the dance, which premiered in 2019 at Philadelphia’s Wilma Theatre, originally commissioned by BalletX, is “inspired by the ecstatic and mystery evoking vermilion loops of Cy Twombly’s Bacchus series painting.”

Each of the dances is a triumph unto itself, a celebration of art full of gratitude for its gifts and the opportunity to share them together, in a singular space, once again; and yet this program is more than the sum of its parts. Wonderfully curated with powerful dancing from a terrifically talented company more spectacular than ever, Grand Rapids Ballet’s “Off the Canvas” reminds us of the power of art and why we need it now more than ever.

Tweet
Published in Theatre
More in this category: « Review: 'Songs for a New World' Offers Hope When We Need It Most Review: Barn Theatre's 'Rocky Horror Picture Show' Is One for the Ages »
Login to post comments
back to top