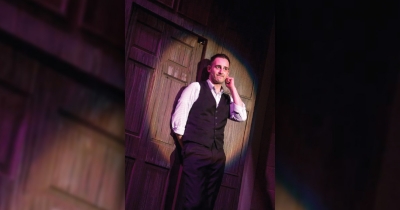 In 2016, Murder For Two ran at Farmers Alley Theatre, in Kalamazoo. The musical, which centered (antically) on a detective’s interrogation of thirteen suspects, was a hit; co-founder and artistic director Jeremy Koch told me that it is among the theater’s most requested re-stagings. Starting November 19th, it returns, this time with tinsel, as Murder For Two: Holiday Edition.

Murder For Two was written by Kellen Blair and Joe Kinosian, who had met in a writer’s workshop. It was early in Kinosian’s career; he was looking for a small, easy-to-stage show. A traditional concert might have been the easiest route, but he wanted something more exciting. In Blair, he found a talented, intelligent lyricist. They began to write.

The show that resulted is a madcap, even surreal comedy, one that taps into the same rich soil that fed not only The Simpsons but the Marx Brothers (indeed, Kinosian has described it as “the Marx Brothers putting on an Agatha Christie movie”). One piano, two performers: one to play the detective, and one to play all thirteen suspects. It premiered in Chicago and has since been staged internationally.

Musically, the show draws from ragtime, in particular composers of novelty songs like Zez Confrey, author of the immortal “Kittens on the Keys.” Apart from sounding good, the music needs to suit each character, help move the story forward, and not grow old over the course of an hour and a half.

When you only have two performers, both need to be great. Playing the suspects is the more spectacular of the roles, as it requires thirteen personalities, thirteen sets of mannerisms, and thirteen singing styles; but the role of detective has its demands as well. You’ve seen ladders: one bad leg, and it’s all over.

As part of a partnership with the Gilmore Piano Festival, Farmers Alley Theatre looks each season for shows which strongly feature piano. Researching shows, Koch discovered Murder For Two, and found it to be a natural fit. “It was goofy, funny and smart. The play lets people think a little and laugh a lot — until they cry.”

The show was a success, prompting requests for another production. Now, Murder For Two: Holiday Edition layers in some Christmas cheer, but is pretty much the same show. “It’s every bit as zany, strange, farcical, and wild as before,” said Kinosian. Asked how audiences have responded to the new version, he said, “They love it.” Then, laughing, “Not that they’d tell me if they didn’t.”

The first challenge in bringing it back to Farmers Alley Theatre was finding the right cast. “You need comedic skills, acting skills, musical skills,” Koch said. It was important, if possible, to find performers who had done the show before, given its challenges. He considers the theater very fortunate to have Kinosian reprising his role – rather, his roles – as the suspects. “He wrote the music,” Koch said. “That’s a big load off any producer’s mind.”

Brandon Lambert, a veteran of the touring show, will play the detective. “Having two people who have played these roles makes our lives easier,” Koch said. “They know this play very well.”

The theater is currently requiring proof of COVID-19 vaccination, as well as masking. That approach may evolve over time, as local, state and national guidelines change. “But we’re going on the side of extreme caution and extreme protection, both for audience members and the performers.”

Opening this season has felt like a triumphant return, he said. Murder For Two: Holiday Edition should continue that triumph, giving its audience members a chance to safely settle in and let delight wash over them.

Tweet
Published in Theatre
More in this category: « Review: Barn Theatre's 'Rocky Horror Picture Show' Is One for the Ages Review: 'Murder for Two: Holiday Edition' Rings in the Season With Pitch-Perfect Performances »
Login to post comments
back to top