Review: 'Murder for Two: Holiday Edition' Rings in the Season With Pitch-Perfect Performances 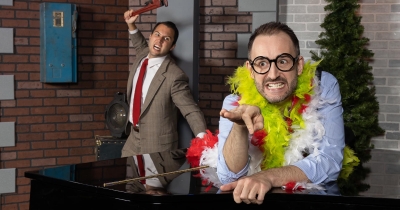 It’s been more than five years since the original Murder for Two, the musical murder mystery featuring more than a dozen characters but only two actors and a singular piano, wowed Kalamazoo audiences as part of the Gilmore Keyboard Festival with the high-octane, madcap, vaudevillian, award-winning comedy.

And it’s exactly the right time for this phenomenal show to return — but made anew and more festive with a little holiday twist at Farmers Alley Theatre.

The great American novelist Arthur Whitney has been murdered at his own surprise birthday party on Christmas Eve, and everyone at the mansion has real motive to have pulled the trigger that shot him in the forehead. Was it his wife, resentful for having give up her own dreams and been forced into the shadows for him? The sinister, seductive ballerina? The town psychiatrist, whose dirt on everyone in the room was fodder for Whitney’s novels? What about Steph, his annoyingly inquisitive niece, at work on her college thesis about how to assist in solving a murder? Or one of the hard-knock members of the boys’ choir that randomly emerges? Could it even be the earnest investigating officer himself?

What keeps the audience on the edge of their seats isn’t so much finding out whodunnit, but more the anticipation of what the two, yes, only two, brilliant actors who create all the characters and provide all the music will do next in this terrifically imaginative show that premiered in 2016.

Joe Kinosian plays all the suspects with such commitment, such dexterity, such grace and sass, it’s impossible to not have a good time watching him work. He creates distinct, hilarious characters by transforming his voice and body, especially his face, and every now and then a prop.

His range is astonishing, his talent beyond imagination, and his intimacy with these characters born of having co-written the script. And he plays with the audience in a way that feels so spontaneous, you can’t help but think there’s some pretty stellar improvisation going on. The sweat he must wipe from his brow throughout the 90-minute performance is well earned.

Brandon Lambert, though he plays only the one character, the investigating officer, works just as hard and appears to be having at least as much fun. The officer’s adherence to protocol and his desire to be made detective as well as his need for a partner (in life, on the job) give the show much of its emotional stakes and provide motivation for many of his actions, most of them hilarious.

Lambert is downright adorable in this role and a little bit of a ham. He doesn’t quite chew the scenery, but he does at one point literally lick a chair. His operatic range and ability as a singer is marvelous, and together, he and Kinosian fill the space with the energy of dozens of actors and both take turns at the keyboard and occasionally play with four hands. At times, it’s sung through, and at other times the music establishes mood, presents background to quick-changing scenes, and creates the festivity one expects from a holiday show.

Together they are completely in command of this hilarious and chaotic show.

Thanks, no doubt, to the terrific technical and artistic talent at Farmers Alley, particularly Directing Supervisor Kathy Mulay whose decades as an award-winning high school forensics coach surely added to the phenomenal mix here. George Eric Perry’s set creates the creepy feel of an old mansion while also making use of Christmas lights and a chandelier that are an intrinsic part of Jason Frink’s successful lighting design. The set also provides opportunities for Savannah Draper to work her props and scenic design magic with details such as shelves dressed with a revolver, a lead pipe, a wrench, and a knife—a nod to everyone’s favorite murderous board game. And Jill BC Du Boff’s exceptional sound design does a lot of heavy lifting for creating all kinds of off-stage action and funny bits.

It all adds up to an extremely clever delight. And this Murder for Two has just enough holiday cheer to temper the murder part; and even though there’s a surprise love story that comes into play, there is absolutely no hint of saccharine Christmas sentimentality some of us dread. It’s simply a smart, funny, feel-good, pitch-perfect romp made special for this time of year.

Tweet
Published in Theatre
More in this category: « Farmers Alley Theatre: Slay Bells Review: Wellspring Shows the Power of Change with 'Unbound' »
Login to post comments
back to top